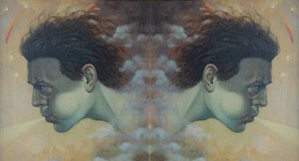 125px
Aeolus Greek god of winds (also spelled as Aiolos or Aeolos) was the son of Hippotes. He kept all the winds inside a mountain, on a floating island called Aeolis or Aeolia, which was also surrounded by a bronze wall. In fact, he was the king of this island, who had been made "keeper of the winds" by Zeus.

When Odysseus arrived on his island, king Aeolus gave him hospitality for one month, and before his departure, he gave Odysseus a bag which contained all the winds, but one, Zephyros, the western wind, which was not put into the bag, so as to gently push their ship towards the island of Ithaca.
100px
During the trip, Odysseus steered the ship all the time. When they finally caught glimpse of the coast of Ithaca, he fell asleep. His men took advantage of that and opened the bag, thinking it would be full of gold and silver. Thus, all the winds got out and the storm created by them pushed the ship back to the island of Aeolia.

Retrieved from "https://camphalfbloodroleplay.fandom.com/wiki/Aeolus?oldid=10404"
Community content is available under CC-BY-SA unless otherwise noted.