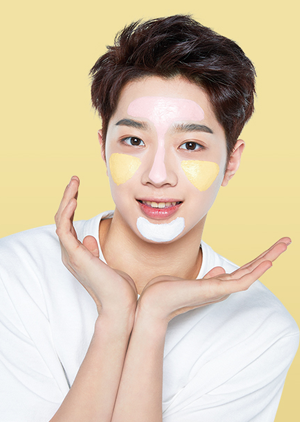 Aiden is very much so someone with a lot of internalized issues that someone his age shouldn't have. The inherited fiery temper from Aetna aside, as that can't be helped, Aiden has dealt with living in his sister's shadow his entire life and always felt like he didn't matter as much as she did. It took a huge toll on Aiden and deep down it made him feel almost unloved and unwanted in a way, and despite that definitely not being the case and being out of the environment now he can't help but still feel like that.

Covering up all those internalized issues though is your average new age teenager. Aiden has quite the personality to cover up how he feels inside. He's as soft on the outside as the rest of him is on the inside, being very clingy and affectionate to both friends and family. It's quite common for Aiden to want to take part in skin ship with his friends, whether it be cuddling or just holding onto them all the time. He wears his emotions on his sleeves, making it very obvious how he's feeling before he even opens his mouth. It almost seems unreal for such a cinnamon roll of a kid to be hiding such internalized feelings.

Accompanying his inherited temper, Aiden can also be incredibly sarcastic and sassy which people tend to confuse with his temper starting to flare up when really he could be in a great mood and just want to be a little troublemaker. He likes cracking jokes and playing pranks, especially on his sister who he is closest with despite the underlying jealousy.

Zhang Liuxian was always a big businessman, ever since he was young. He started out in a big firm as an intern and soon gained the knowledge to open up his own like it when he was a few years older. He was powerful and cunning and it didn't take him long to become one of the most successful businessmen in Taiwan. He was of the envy of many women, mostly for his wealth, and he knew that and exploited it to get his own way. So much so, it wouldn't be an understatement to say his company had shares in every sector of Taiwanese society.

One night during his usual escapades of leading women on, Liuxian met a woman who claimed to be a tourist, Oizys in reality, and he was attracted immediately. There was a strong aura of her and she seemed unfazed by whatever Liuxian said. She became his new conquest to tackle and, after a few weeks of a long and gruelling wait for him, Liuxian and the woman mated. Like those before, she left the following morning and he assumed he'd never see her again, to which he was oh so wrong. Not even a week after the two parted ways, the woman arrived on his doorstep and handled him a bundle which, inside, had a little baby girl that was unmistakably fathered by him. The woman offered him no explanation as to how the child was birthed so quickly and left with a small note with the instruction to read as and when the girl reached thirteen years old. Confused, but knowing a child abandonment scandal would wreck him more than him having a daughter, Liuxian took her in and named her Meiying.

Liuxian took to his daughter fairly quickly and soon fell in love with the father lifestyle. Juggling being a prominent CEO on top was a challenge but it was one he rose to, not wanting to let his new bundle of joy down. Three years later, he met another woman in a similar way he did to Oizys but this time it was unintentional. The woman herself ended up being the volcanic mountain goddess Aetna. Liuxian didn't intend to hookup with anyone but years without doing so meant he was desperate and, sure enough, not even a week later after the one night stand he was handed another child but this time a boy. Seeing no choice, he took him in and named him Yuchen.

Meiying rose to the challenge of being an older sister, doting on Yuchen whenever she had the chance. And, for the most part, that was completely fine but Liuxian noticed she had a tendency to not know how hard she would playfully hit him, still having no concept of pain as children of Oizys lacked one. Yuchen had his own issues as well, from a very early age he had a short fuse and didn't put up with a lot of things. Babies and toddlers don't really have anger in them, which was Liuxian's first indication that Yuchen was going to be a handful like his sister, just in a different manner. Yuchen could go from playfully fighting with Meiying in a child like manner to getting angry quite quickly.

The suppressed worries Liuxian had about both Yuchen and Meiying began to crop up again but, probably hoping both were just going through phases. However, no changes ever came about and slowly Liuxian began to get worried, especially as the two got older and play fights became more common - Meiying could do the smallest thing that came off slightly crossed and Yuchen would lose his temper in seconds, where as Yuchen could attack Meiying all he wanted, but she never would have a reaction indicating pain and when she retaliated, Meiying never knew how hard she hit which only led to Yuchen getting angrier with her.

Multiple things built up, Yuchen grew to have such a fiery temper that it had spread from not just Meiying but to Liuxian and strangers as well. That, paired with Meiying being far too apathetic for someone her age, Liuxian found it too hard to handle and sent his children to live with his sister in Toronto. The two adopted English names to go along with their new lives; Yuchen became Aiden and Meiying, Luna. By a stroke of luck, their aunt was a demigoddess herself and was able to at least sense a demichild aura from the pair, albeit not knowing who they were children of. She looked past Aiden's fiery temper and Luna's apathy, pinning it down to traits they had no control over inheriting.

The lifestyle difference for Aiden after moving to Toronto, despite being only three years old at the time, was quite evident. Obviously being so young, Aiden really had no distain towards his father Liuxian, but the quality in care was like night and day between him and Aiden and Luna's aunt. Their aunt actually spent time and tried understanding their inherited traits, where as Liuxian never did. Their aunt originally cited Aiden's fiery temper to him being a child of Lyssa or a goddess of the sort, not even taking the fiery volcanic goddess Aetna into consideration.

Being the Aiden was so young when he moved to Toronto, it really wasn't hard at all for him learn English as he hadn't really grasped Mandarin and Cantonese yet either, in fact since coming to Canada he only ever spoke the languages still because his aunt didn't want him losing his roots. Life in Toronto was great for Aiden, starting pre-school shortly after arriving and then kindergarten right after. There were times that Aiden's temper flared up again, like when another student would accidentally knock over his block towers or take a crayon he needed. It was hard for Aiden to control something that was wired into his personality.

As Aiden got older and his aunt took him to see therapists, they were obviously never able to find a direct root as to why these outbursts of anger were happening but regardless gave him different methods to help control his temper when he felt like lashing out. The methods helped a lot, and within a few years Aiden was more in control of his outbursts and could stop himself from having them, obviously flaring up every once in awhile of course.

Being in a house with three demigods, Aiden's first monster attack happened much earlier than that of a normal minor demigod would have. Being nine years old at the time and Luna being twelve, it took place in a nearby park when their aunt decided to take them out. It happened so fast that Aiden barely remembers it, only remembering his aunt killing what he was told were two hellhounds while a satyr killed the third. The satyr seeing the aunt as a suitable guardian for their age, left Aiden and Luna in her care.

After the attack Luna began training and got her own weapon, Aiden on the other hand wasn't allowed to. He was jealous for years that Luna was able to learn how to defend herself and he couldn't. At times even making his temper come back worse than before. He felt helpless a lot whenever a monster would attack them and he had to rely on either his aunt or Luna to defend him. Luna getting such special treatment from their aunt also made Aiden feel like he wasn't going to amount to as much as his older sister could, or that he didn't deserve the special attention and never would be allowed to get it.

Around when Aiden was thirteen, Aetna showed up to their house while he was at school, giving his aunt a pair of sabre blades. His aunt initially didn't want to let Aiden train, viewing him still as the baby as well as figuring Luna and herself were enough protection for him. This led to her hiding the swords in the garage until she was finally willing to let go of Aiden being a baby.

It wasn't until Aiden was fourteen that he stumbled upon the swords in the garage. He noticed that in one of them there was an engraved message on it saying Aiden, my son. With this new discovery, Aiden brought the sword to his aunt and everything was revealed to him. Luna was already well aware of the Pantheon, even knowing that Oizys was more than likely her godparent. Aiden on the other hand felt like he had been living in the dark that was Luna's shadow his entire life.

His aunt did her best to catch Aiden up to speed, doing her best to prep him for camp life while also still trying to figure out what godparent Aiden had. As he had no clue how to use any of his powers there was no real indication aside from the temper, but even then that really didn't narrow anything down. Truthfully he wasn't that interested, feeling like it was just because she felt bad for excluding Aiden for years while helping Luna. Aiden took to learning how to use his sabre blades quickly, seeing it as an escape. Learning how to use them offensively and defensively quite quickly. He never truly got to see what he was capable of when it came to using them, seeing as he was always either with his aunt or Luna.

Truthfully speaking, Aiden wasn't ready when he and Luna were taken off to camp. He was still a bit rusty with his swords although he had learned the basics quickly, and he didn't know how to defend himself without it. But of course, his aunt didn't take him into account when wanting to send Luna off to camp and lumped Aiden in with her. Almost immediately he was claimed as a child of Aetna, the first of his kind to ever be inducted into camp, becoming the head counsellor immediately.

Powers of a Child of Aetna:

Retrieved from "https://camphalfbloodroleplay.fandom.com/wiki/Aiden_Zhang?oldid=1831373"
Community content is available under CC-BY-SA unless otherwise noted.