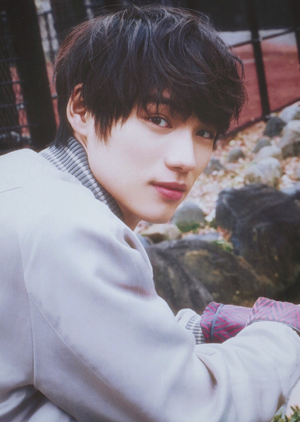 Aito is a very alluring and flirtatious young man. Some may call him some rather unpleasant things such as a man whore or a slut, and they definitely aren't wrong, but Aito prefers to say he just simply likes attention from males. It's hard for him to resist when he sees a man he's attracted to, and with such a wide scope for his ideal type it's hard to find someone he isn't attracted to or willing to flirt with. If he isn't going to try and sleep with you, he'll definitely flirt with you and at least try and get some cuddling or spooning out of it.

It may be hard to believe given his past and flirtatiousness, but Aito isn't all sex crazy and hormones. Granted it is a large part of who he is, he also tries to live a carefree and adventurous lifestyle. He really does want to do everything he possibly could in life, such as travelling and living a high class lifestyle full of parties and concerts. He may sound like a complete scumbag just trying to sleep with hot guys and party all the time, but he truly is just trying to get it out of his system before inevitably deciding to settle down.

Living on Olympus and seeing Zeus and Hera's relationship with all their children truly did make Aito jealous, and perhaps that was the reason why he wanted Zeus so bad to have a taste of that family dynamic he always wanted and was always lacking without having a father in his life. Once he's gotten all his partying and whoring about out of his system, Aito wants to get married to the man of his dreams and raise a family, having loved kids ever since he was a young attendee to the younger demigods and nymphs up on Olympus.

Hideki Tanaka, a Japanese immigrant who moved to New York with his family when he was only twelve, was now a successful lawyer. From the outside, it appeared as though Hideki had everything. A large house, plenty of money, and a successful career. However, Hideki was missing out on actual human relationships, favouring one night stands and casual flings over a lasting substantial relationship due to his busy and demanding career.

Life was demanding on Hideki, and he tried hiding it by burying himself in his work. He only ever allowed himself to have a night of fun once a week, once every other week if he was too busy. On the night of his birthday in 1960, March 19th, Hideki allowed himself to have a night of fun in celebration of not only his birthday, but winning a case. While out drinking with some of his close friends, Hideki met a rather alluring woman who seemed to be around the same age as him. There was an almost heavenly air to her.

The night got away from Hideki and the woman, and in the morning he woke up in a bed in the back of the bar. His clothes were thrown half-hazard on the ground insinuating that he had gotten up to something the night prior. Hideki recalled exactly what had happened, and although it wasn't ideal to happen in a bar, Hideki didn't regret it. He went home to his condo after collecting himself and went back to his usual work routine.

You wouldn't be able to explain the thoughts running through Hideki's mind when a baby boy showed up on his door step only six days after his night out at the bar. Having a child was far from Hideki's plans, and honestly put a huge weight on his shoulders that he wasn't ready to endure. Figuring he'd give being a father a small shot, Hideki named the child Aito. Despite being born in America he still wanted the baby to fully embrace his Japanese heritage.

Five days later and Hideki quickly learned parenting wasn't for him. He made the hasty decision to put Aito up for adoption, leaving him in the hands of child services. Oizys saw what Hideki did from up on Olympus and she certainly wasn't pleased, considering Oizys didn't have as many demigod children as some so for one of her kids to be mistreated, it didn't sit well with her. She aired her grievances to her mother Nyx, with no real goal or wish to come out of the conversation. However the next day Nyx went to the adoption agency in New York and brought Aito up to Olympus.

Oizys was originally shocked that Nyx went down to the mortal world just to retrieve one of her kids, but obviously had no problems with it. Aito was raised by some of Nyx's handmaiden nymphs, obviously not being able to get taken care of by Oizys due to direct interference. Aito spent all of his childhood in the care of Nyx's nymphs, living amongst the gods and goddesses up on Mount Olympus but never truly interacting with any of them until he was about twelve or so.

At the age of twelve Aito began what would be a long life of being a servant to the gods up on Olympus. There was no real structure to his life as a servant, helping out wherever he was needed and with whatever god or goddess needed him. He was mostly used by quite a few of the male deities for pleasure purposes after he turned seventeen, some of his most regular "clients" if you will being Ares, Apollo, Zeus, and Dionysus. Although Aito slept with pretty much every god up on Olympus, those four were among his favourites and the ones he went back to the most.

By the time Aito turned twenty he was granted immortality by Zeus, Zeus saw it as the age in which he looked the best and wanted to preserve Aito's appearance. For decades the gods used Aito as a call-boy at night while he was a servant to the goddesses during the day, and for those decades he managed to keep the two jobs separate, not letting the goddesses know about his night time activities. That is until one night when Hera was searching around for Zeus and found him in bed with Aito and Apollo, both the gods using Aito at once. Hera was flabbergasted and banned Aito from ever sleeping with Zeus again, will also warning him that she'd tell the other goddesses if it kept up.

The punishment didn't just suck for Aito but also for Zeus, it had become quite common for Zeus and Aito to hook up in the dark of the night and even sometimes during the day. While the ban was in place it was torture for Zeus to watch Aito scamper around and continue sleeping with Apollo, Ares, Dionysus, and the rest of the gods up on Mount Olympus. Going against his wife was no new thing for Zeus, in fact he was known for it. So when he picked up his affair with Aito, nobody was really surprised. The two managed to hide it for some time, sleeping together whenever Hera wasn't on Olympus and then Aito would go back to sleeping with the other gods until the next time she was gone.

Unfortunately things can't always be hidden forever on Olympus, and Hera found out about Zeus continuing his affair with Aito. Not only did she banish him from Mount Olympus, but she also placed a curse on him where if he were to ever get someone pregnant the baby would only have a 5% chance of actually being born. Aito obviously didn't know about the curse, and even if he did he probably would have shrugged it off due to his homosexuality. But it'd obviously screw up his future had he ever wanted kids.

Now being 2018, Aito stepped down into the mortal world for the first time in his entire life. Before departing Oizys gave him a map to a place called Camp Half-Blood. She said there was a new cabin for kids of hers there and that he would be safe if he chose to attend the camp. Obviously having nowhere else to go, Aito went to Camp Half-Blood where he began staying in Oizys' cabin, as well as finding new guys to sleep with and fill the void of the gods who mated him for decades.

Powers of a Child of Oizys:

Retrieved from "https://camphalfbloodroleplay.fandom.com/wiki/Aito_Tanaka?oldid=1831475"
Community content is available under CC-BY-SA unless otherwise noted.