The Powers of Zeus

There are 2 sides to Alex. He is very gentle and reserved with everyone he meets and maintains a sly sense of humor with every conversation he has, often joking about every day topics. Although often being perceived as the quietest in the room, Alex is extremely driven to almost chaotic means. Once he has a goal in mind he will do whatever it takes to achieve it, often literally. A romantic at heart, Alex has a quiet confidence about him and is extremely loyal to the few friends he has.

Cassandra Jay was a tour guide. She made a living in the small tourist town of Bar Harbor, Maine. Every day after the massive crowds of tourists had been attended to, she loved to climb the ridging of the ancient galleons on display in the harbor. She loved how clean the air was on top of the masts, and enjoyed the weightless feeling she had while up in the air.

The sky god, Zeus, sensed this, and would often watch her as she relaxed. Her love for the air touched his heart.

Then one day, there was an accident, and Cassandra Jay fell. The ridging on one of the ships had worn thin with the years of contact and rough weather, and down she plunged.

Zeus was pained to see her fall to her death, as he had grown fond of her. He summoned the winds, and caught her, and carried her to the bottom of the ship, where she landed quite securely on the deck. in a secluded alley. The Mist covered it up to make it look like she landed safely in a spare pile of ropes.

Once Cassandra processed that she was alive, Zeus introduced himself, but didnt tell her who he truly was. They cared for  each other instantly, and began dating that night, hitting the famous bars of Bar Harbour, with things escalating very quickly.

Zeus next visited his beloved Cassandra when she found out with a shock that she was pregnant a few weeks later. Zeus consoled her and told her everything. At first, she didnt believe it, but after a while it made sense. The fact that he was a god only made her love him even more. Zeus spent the night with Cassandra again, as he wanted to be with his to be son for a little while longer before he had to leave. When Cassandra awoke, she found out she was alone once more, with Zeus no where to be seen. He had only left a letter, explaining everything once more, and including a map to Camp Half Blood, and insisting that the baby be called Alex.

Alex was brought up with a little more than nothing. Somehow, though, there was always just enough to eat. Cassandra was very particular, and always made sure Alex looked clean and presentable at all times, despite them being so poor. His mother was always working on weekdays, but would always take the weekend off to be with Alex. She loved her son, and thought he deserved better.

Life went on like this for quite a while. Alex was later diagnosed with dyslexia and ADHD, but he was a hard worker, and so this didn't hinder him much.  As he got older, he started to work after school to earn a little more money at the town waterfront to help his mom. He did odd jobs on the display ships, often performing demonstrations high above the ship's deck, unknowingly using his powers. It was here where he also discovered his love for sailing, as he was naturally very good at directing wind powered ships.

Sailing was how he spent all of his free time, teaching himself maneuvers on the waterfront ships, particularly The Redeemer. Alex loved his life and enjoyed his childhood.

When Alex reached the age of 13, the unthinkable happened.

He was walking home from the waterfront one day after a full day of sailing when he heard a horrible screeching sound behind him. He turned around and saw a horrible creature with the body of a bird and the head of an old hag. It was a Harpie. Alex froze up as the Harpie screeched again and flew with amazing speed towards him, claws outstretched.

Unknowingly, Alex summoned the winds and sent the harpie spiraling into a nearby tree, immediately disintegrating.

Scared and confused, Alex ran, heading for his house. After a while he ditched his backpack, as it was slowing him down. Breathless, Alex arrived at the house, nearly barreling through the door. He found his mother there, and told her everything. She told him to go into her room and grab everything in the secret drawer, and then to meet her in the car. She said that it was time for him to go, and that she should have done this sooner.

Too panicked and confused to ask what she meant, he ran to his mothers room and located the secret drawer. He grabbed everything in the drawer and ran out of the house and onto the sidewalk. He read the instructions.

He ran out into the driveway and jumped into the car. His mom had already started the car, and they set of right away. Alex handed her the contents of the drawer, but she only took the map to the mysterious Camp. She told him to keep the envelope and the instructions. The instructions detailed how to get to Camp Half Blood.

3 hours had passed since they started following the map. He was now in a meadow, approaching a forest. It was then that suddenly, he heard the a horrible roar fill the air.

It came barreling towards there car, at an amazing speed. His mom didnt see the monster because of the Mist. Alex tried to warn his mother, but it was to late. The car flipped over at the impact of the monster, and skidded of to the side of the road and into a ditch.

With adrenaline the only thing keeping him conscious,Alex quickly scrambled out of the car to get his bearings. He had a cut in his forehead and down his arm, nd was bruised almost everywhere else, but was otherwise fine. The car had luckily landed rightside up, but was damaged beyond use.

With a jolt, he realised his mother had still not made it out yet. He ran to the front of the car and pried open the door. He saw her , sandwiched against the wheel and her seat, barley conscious. Alex tried to get her out, but she was stuck. He was getting desperate. He then heard his mother croak out a word "Go" she told him.

A second later, there was a huge roar. The Chimera picked up the car, with his mother still in it, and flung it away. It hit the nearby rocks, immediately crumpling. A few seconds later, it exploded.

With a shiver, he realized the sad reality. This freakish creature had most likely killed his mom. No, that thing most certainly did. He could feel it. That thing had killed the only person close to him, his beloved mother.

A deep rage/anger welled up inside Alex, and through that, he felt power, power he never knew he had. The Chimera roared again and flew at Alex. Alex unconsciously summoned the winds and hurled it at the Chimera. It flew back and barreled into the ground, vaporizing instantly.

After this, Alex just looked at where the Chimera had vaporized, slightly curious at what just happened. Then, a huge, uncontrollable, overwhelming wave of sadness swept through him, and he screamed with sadness and despair at the wilderness. His mother was dead.

Blinded by tears, he ran in the general direction the map told him to go. He finally collapsed in the middle of the forest, crying and screaming at the forest uncontrollably, punching trees and the ground until his fists were cut and bloody.The map blew away in the breeze, but the envelope, being somewhat heavier, stayed on the ground where he left it. Finally, exhaustion overcame him, and he fell into a depressed sleep.

The next day, he awoke early in the morning. He was sad and depressed. His hands were sore and bloody, and the blood on his forehead had dried along the cuts into a messy scab. He  was also starving, but he sat there. He couldn't find the will or the urge to move.

He went on like this till midday. He suddenly pictured his mother. She would want him to live, and reach this mysterious Camp. He knew how much she loved him, and knew how disappointed she would be if he gave up and died in the middle of the forest without living his life. He would go on living, and try to survive, but only for her.

He wandered through the forest until he came to a river, where he cleaned his bloody fists, head and arm as best as he could, he gritted his teeth through the pain as he wrapped his fist, head, and arm wounds in cloth to protect the wound from infection.

After he finished cleaning himself up, he traveled for a while up river (And closer to camp Half Blood) until he found a berry bush. He ate the berries ravenously,until he was satisfied. By now the sun was going down. He nestled himself under an overhanging tree and fell asleep, at peace to know that his mother would approve of what he was trying to achieve.

The next few days were like this, although he was being constantly attacked my hell hounds, harpies and other monsters. He was getting a little weaker with every attack, always sustaining minimum wounds that add up. His days were filled  with him tending his wounds and feeding of berry bushes. All the while he had the envelope he was to give to Alexander The Great.

One morning, he was suddenly awoken with a start, the hairs on the back of his neck bristling. He slowly got up, and immediately sensed something was wrong. The birds had stopped singing, and the forest was eerily quite. Shade cantered nervously. Then he heard a faint steady thump, as if something large and heavy was stomping through the forest. After a while, he then saw it.

It saw Alex, and gave a huge roar and stamped its feet. It then charged, barreling through trees.

Alex ran, bolstered by a gust of wind he had unknowingly summoned, eyes wide with terror.

The Cyclops pursued him on foot, barreling through everything in its path. Suddenly, it slammed into an invisible barrier and exploded into dust.

Alex was a little overwhelmed by all of the attention he got as a newcomer, although he appreciated how welcome everyone made him feel. He spent most of his first moments at Camp Half Blood by the seaside or on the training grounds. He missed his old life in Bar Harbor, and could already feel that life would never be the same for him every again.

He was claimed only 2 weeks after arriving at Camp, while teaching a group of campers how to sail, with Zeus's lightning bolt glowing over him for all to see.

Alex is Captain of the 44 Gun Ship-of-the-Line, The Empress, crewed exclusively by wind spirits (Venti). 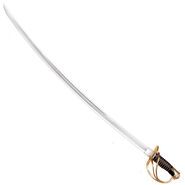 Retrieved from "https://camphalfbloodroleplay.fandom.com/wiki/Alexander_Jay?oldid=1829795"
Community content is available under CC-BY-SA unless otherwise noted.