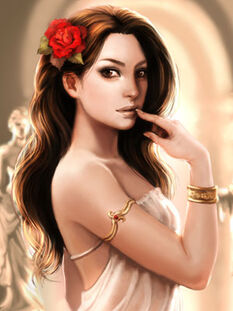 APHRODITE was the great Olympian goddess of beauty, love, pleasure and and procreation. She was depicted as a beautiful woman usually accompanied by the winged godling Eros (Love). Her attributes included a dove, apple, scallop shell and mirror. In classical sculpture and fresco she was often depicted nude.

In Greek mythology, Aphrodite is the goddess of love, beauty and sexual rapture. According to Hesiod, she was born when Uranus (the father of the gods) was castrated by his son Cronus. Cronus threw the severed genitals into the ocean which began to churn and foam about them. From the aphros ("sea foam") arose Aphrodite, and the sea carried her to either Cyprus or Cythera. Hence she is often referred to as Kypris and Cytherea. Homer calls her a daughter of Zeus and Dione.

After her birth, Zeus was afraid that the gods would fight over Aphrodite's hand in marriage so he married her off to the smith god Hephaestus, the steadiest of the gods. He could hardly believe his good luck and used all his skills to make the most lavish jewels for her. He made her a girdle of finely wrought gold and wove magic into the filigree work. That was not very wise of him, for when she wore her magic girdle no one could resist her, and she was all too irresistible already. She loved gaiety and glamour and was not at all pleased at being the wife of sooty, hard-working Hephaestus.

Aphrodite loved and was loved by many gods and mortals. Among her mortal lovers, the most famous was perhaps Adonis. Some of her sons are Eros, Anteros, Hymenaios and Aeneas (with her Trojan lover Anchises). She is accompanied by the Graces.

Her festival is the Aphrodisiac which was celebrated in various centers of Greece and especially in Athens and Corinth. Her priestesses were not prostitutes but women who represented the goddess and sexual intercourse with them was considered just one of the methods of worship. Aphrodite was originally an old-Asian goddess, similar to the Mesopotamian Ishtar and the Syro-Palestinian goddess Ashtart. Her attributes are a.o. the dolphin, the dove, the swan, the pomegranate and the lime tree.

In Roman mythology Venus is the goddess of love and beauty and Cupid is love's messenger.

Aphrodite contributed greatly to the cause of the Trojan War, which lasted ten years and caused the violent downfall of the city of Troy. She bribed Paris, prince of Troy, with the most beautiful woman in the world (Helen), in return for him declaring her the fairest of the goddesses; a title she vied for with Hera and Athena.

Aphrodite supported Troy in the war, and intervened many times on behalf of Paris and her favourite son Aeneas, who was also of Trojan royalty. She also sparked the conflict by causing the already married Helen to fall in love with Paris. Despite the fact that their affair caused the end of Troy, Aphrodite seems to view them as a tragic and sympathetic couple.

In one version of the story of Hippolytus, she was the catalyst for his death. He scorned the worship of Aphrodite for Artemis and, in revenge, Aphrodite caused his stepmother, Phaedra, to fall in love with him, knowing Hippolytus would reject her.

In the most popular version of the story, as told in the play Hippolytus by Euripides, Phaedra seeks revenge against Hippolytus by killing herself and, in her suicide note, tells Theseus, her husband and Hippolytus' father, that Hippolytus had raped her. Hippolytus was oath-bound not to mention Phaedra's love for him and nobly refused to defend himself despite the consequences.

Theseus then cursed his son, a curse Poseidon was bound to fulfill, so Hippolytus was laid low by a bull from the sea that caused his chariot-team to panic and wreck his vehicle. Hippolytus forgives his father before he dies and Artemis reveals the truth to Theseus before vowing to kill the one Aphrodite loves (Adonis) for revenge.

Glaucus of Corinth angered Aphrodite. When he was competing in the chariot race at the funeral games of King Pelias she drove his horses mad and they tore him apart. His ghost was said to frighten horses during the Isthmian Games.

In one Greek myth, Aphrodite placed the curse of snakes for hair and the stone-gaze upon Medusa and her sisters. Aphrodite was jealous of the three sisters' beauty, and she grew so jealous, she cursed them.

Aphrodite is on occasion temperamental and vain as well as crafty, flirtatious, and seductive. Despite these qualities, Aphrodite is both very loving and passionate, having a sincere faith in love that is absolute and true. She is very benevolent to those she favours (such as Percy) and deeply loves and cares for her children as well as their fathers. She has much insight into mortals' emotions, and knew that Piper's father would only truly recover if she gave him the potion to forget the supernatural world. She also left him without telling him the truth, so that he would only remember her as a mortal woman whom he lost forever, rather than a very much alive but unattainable goddess.

Aphrodite is the personification of beauty, and appears to others as their personal epitome of physical attraction which is why her true appearance is unknown. Aphrodite will take very good care of how she looks to others and can see the tiniest flaw. Aphrodite is a gorgeous, perfect, eternally young woman with a beautiful body. 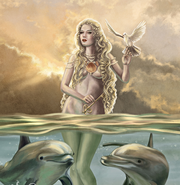 Add a photo to this gallery
❤Abilities❤

Aphrodite, being a daughter of Ouranos, and the eldest Olympian of all, is an extremely powerful goddess, surpassing many others, as "love can bring even the gods to their knees."

These are the sites that this information was gathered from:

Retrieved from "https://camphalfbloodroleplay.fandom.com/wiki/Aphrodite?oldid=1569590"
Community content is available under CC-BY-SA unless otherwise noted.