Camp Half-Blood Role Playing Wiki
Register
Don't have an account?
Sign In
in: Characters Who Left, Sonofboreas16, Adrian,
and 2 more

Adrian is one hyper guy. He loves to be active, and is full of energy. He is very quick when it comes to running, or sports, but is also a very quick thinker, and can come up with plans, answers, and excuses on the spot. Even though he has lots of energy, he knows when he has to be calm, like in serious situations. He is very brave and confident of himself, and like to put himself in difficult situations. He loves girls, and guys, and is a huge player, but if he finds the right person, he will settle down. He is very tolerant of different people, and does not judge. Most of his days he is nice to every one, but when he is mad, he is very violent. When he is by himself, he does get emotional, and always thinks about Mary Jane, his dead child, and that night his friends were killed. He puts on his normal attitude for show, but he breaks down when he is by himself.

Sandra Heywood was a lifeguard for a beach in Florida. One day on th job, a man started to scream for help from the water. She ran out to him, and helped him to shore. When she asked what the problem was, he answered "I was drowning and i needed a pretty girls help." After the situation cleared, he told her his name was Austin, and asked her out on a date, which led to her house, which led to Sandra getting pregnant. When she found out she was pregnant, Austin was gone. Nine months later, she gave birth to twins, Adrian and Jessica.

Adrian and Jessica grew up very close to eachother. They were best friends growing up and did everything together. They had the same friends, were always in the same class, hung out after school with friends, and went to the beach together. They knew eachother's secrets and always had eachother's backs. Sandra loved this about her children. She knew nothing could seperate the two.

When the twins were in seventh grade, they were attacked by a gian black dog that jumped into there backyard. Jessica screamed and started to run inside, but when she turned to look for her brother, the dog was on top of her brother. She screamed for her mom, but remembered that she was not home. She did not know what to do. Her brother was being mauled and beat by a huge dog. She screamed for help, but no one came. She then acted on impulse. She ran and picked up a near bye stick, and threw it at the dog. That got its attention. The dog then ran to her and was about to pounce on her, when an arrow peirced its neck, turning it to gold dust. Jessica looked around, and she saw nothing. Then the gate opened and her best friend, Mary Jane came running in. She asked what had happened, and Jessica explaine. When Sandra came home they rushed Adrian to the hospital, and he soon recovered.

In 9th grade, Adrian joined the football team, and was very good at this. Jessica was not into sports, and did not like the kids who played sports. This caused a giant rift in their relationship. They stopped hanging out with eachother and found different friends. Adrian would not even speak to her at school. Jessica was saddened by this and she stopped talking to him completely, even at home.

Two years later, they were walking home, Adrian with a group of friends, and Jessica, who was way behind them, was by herself. Out of the sea came monsterous seal like creatures with dogs faces. They came running at Jessica. Jessica let out a horrible scream and srtarted running away. Adrian turned and saw the monsters running after Jessica. Adrian ran after them, pushing his friends aside. He ran as fast as he could. He had to save his sister. Jessica had ran into an alleyway and was in a deadend, no where to go. Adrian ran into the alley, and screamed at the monsters. It got their attention and some started to run at him. Adrian was scared to death. He put his hands up in fear when they got close, and the ground shook. When he looked up all the monsters had been knocked off their feet, and were starting to get up. Adrian yelled for his sister, who ran towards him. When she was almost there, one of the monsters tackled her. The monster started to scratch her, when an arrow peirced its back. It rolled over and turned to golden dust. Adrian and Jessica did not stay to find out what had happened, they just ran away from the scene and ran home.

After that incident, Adrian vowed to always stay with his sister. He only hung out with his friends if they allowed her to, which they did. Jessica was eventually accepted into the group, and she became popular. She and Adrian dated many people, and were know as the most popular people in school. Their relationship mended, and became stronger than before. They were always on the look out for the monsters that attacked them, and could always tell they were being watched. Eventually the two graduated and went off to the same college. They were doing well in college, until their first spring break.

That spring break, the twins decided to go out to a cabin in the mountains. They decided to bring Adrian's girlfriend, Mariana, and his bestfriend, Brandon. Jessica brought her bestfriend, Mary Jane, and her two other friends, Aeriel and Amber. The group got to the cabin, and they immediately started to party. They blared their music and got their drinks. They were having so much fun. That all changed the third night. They saw on the news that a serial killer was on the lose in the cabin resorts area. The group was terrified. The girls wanted to leave, but the guys wanted to stay, so they stayed. Later that night, someone was pounding on the girl's room window. Jessica was sure it was nothing so she went to check it out. When she put her head up to the window, a hand came through the window and stabbed her in the head. Jessica fell to the floor, lifeless.

Adrian heard the screaming and ran in to find his sister dead. He started to scream at the girls to get out of the room and that they had to leave. The girls ran out of the room, except for Mary Jane. Adrian looked and did not find her. He ran back out and told the group they had to go. They started to leave, when the man busted through the front door. Aeriel and Amber screamed and ran to the kitchen of the cabin. The rest of the group ran back to the girls room. Five minutes later they heard the last of Aeriel and Amber's screams. Adrian, Brandon, and Mariana crawled through the window of the girl's room. They ran to the their car and jumped in. They started to drive away, when the man was standing in the road. Adrian swerved the car to not hit him, and the car flipped. When they got out of the car, Mariana did not survive it. Adrian and Brandon started to run back to the house for safety. They locked the doors, and poorly boarded up the door and the girl's window. The man got through it and killed Brandon after he got in. Adrian went out to the back and tripped over a body. When he looked it was Mary Jane, who was alive. He helped her up, and the two ran throught the forest, eventually getting to a road, where a car stopped and picked them up, taking them to a police station. They explained the situation to them, and the two were taken back home to their parents.

Three months after the incident, they had all the funerals, and Mary Jane and Adrian started dating. They had felt close after the incident, and eventually got stronger feelings. They eventually got married. During their marriage, Adrian found out about greek myths, because Mary Jane was a satyr. SHe was actually Jessica and his protector. About a month into the marriage, Mary Jane got pregnant. Throughout the pregnancy, Mary Jane had many mental breakdowns, worse than any she had had befoe. Two months into the pregnancy, she killed herself, because of the grief she felt, leaving Adrian alone with nobody to love. Adrian went into a deep depression, not contacting anyone for a long time. He eventually became his old self, hiding his true feelings. Adrian was attacked by the same type of monsters that attacked him and his sister many years ago, which almost killed him. If it wasnt for the strange goat man that saved him. The goat man explained what was going on, and what he was. He took Adrian to camp, where he was claimed by Poseidon. 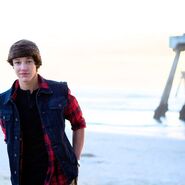 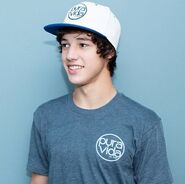