He is a very proud person. He thinks that he is better than everyone, except for immortals. He is very fierce and loves to fight. If you mess with him, he will beat you down. He is a huge whore, and moves fast. He is openly bisexual, but likes guys better. He is not sad to admit he is bisexual, and openly admits it. He is very cocky. He usually transforms into a Harpy, Golden, or Crowned Eagle. 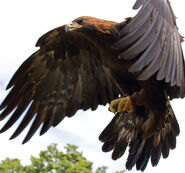 Harpy Eagle
Add a photo to this gallery

Specific to the Eagle

Retrieved from "https://camphalfbloodroleplay.fandom.com/wiki/Archived:Akylas?oldid=1547093"
Community content is available under CC-BY-SA unless otherwise noted.