Allen is a down to earth kind of guy, he is patient, kind, intelligent and charming. He often takes his time to finish any tasks, and is extremely focus when he put his mind in something. More often he at times procrastinates in most jobs he does, when motivated he can finish a task quickly.

One night while Henry Holt was attending a festival in his home town of Gila. He met a beautiful woman by the name of Dima Avling, they hit it off right way. The two dated for several months, before Dima became pregnant with Allen. When Dima broke the news to Henry at first Henry was ecstatic to hear that his girlfriend was pregnant, well at least until she also told him she was a Greek goddess, and that she no longer is able to see him. In time he eventually accepted and didn't harbor no negative emotions to Allen's mother, but at the time he was in shock and heartbroken. After revealing the news to Henry, Demeter left, and nine month later after Allen was born she came back shortly, but only to drop Allen off.

Henry ended up raising Allen in his ranch in New Mexico, where he had do chores, learn to take care of the animals, and survival skills. If that wasn't enough he also had to go to school which was difficult since he had ADHD and Dyslexia, but he did makes friends. At the same time Allen did takes some Mixed Martial arts classes, in order to help in learn how to fight if the need arrives. All around Allen had a pretty normal childhood, but all that was about to change when one day while clean out the stables. He was attacked by harpy. Allen at first was in shock and attempt to fight back the best he could, but because of inexperience with fighting monsters harpy was winning. Lucky for him a near by satyr; who was in the area after catching a demigods scent, heard all the noise that Allen and harpy was making and decided to help Allen out. The satyr and Allen were able to defeat harpy, and after the satyr began to explain to him about that he was a demi-god, and about Camp Half-blood then offered him a chance to come to the camp. Allen was off-course shocked by this revelation, but after a moment he accepted that he was a demigod, and the satyr offer. A few days later Allen had arrived in Camp Half-blood where he was immediately claimed.

Ever since Allen arrived at camp he began to spend more and more time at the stables. He oftentimes help with some of chorus and taking care of the animals that is in there. One day he went into the stables and noticed a new Pegasus. As he went closer to it he saw a note on the floor, he picks it and began to read it. If you are going to spend most of your times in the stables, you might as well be taking care of a Pegasus that actually belongs to you. Luckily I had managed to convince Poseidon to grant me the opportunity to give this one to you. I hope you enjoy your gift son..- Demeter. Allen became very excited by his mother's present and immediately decided to take care of Pegasus. At the moment the pegasus is staying at the camp's stables 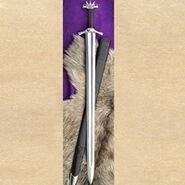 Allen Viking sword is made from Celestial bronze 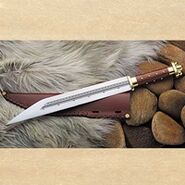 Allen's Seax is made from Celestial bronze

Allen's whip is made from Leather 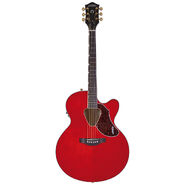 Allen's Rancher guitar
Add a photo to this gallery

Retrieved from "https://camphalfbloodroleplay.fandom.com/wiki/Archived:Allen_Holt?oldid=1580787"
Community content is available under CC-BY-SA unless otherwise noted.