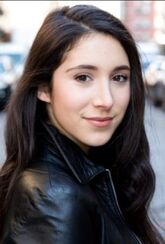 Anora is a serious person. She dislikes immaturity and values intelligence. Her step-mother's death greatly hurt her. She mourns her often. She does not warm up very easy. She enjoys outwitting others. She is a generally curious person.

Edmond was a simple man. He did cheap little magic shows for people. One day after finishing his job, he went to a bar. He met a mysterious woman with a charming smile. She was looking at him all night until she pulled him aside. They took it back to Edmond's house (where things got a little rated X). When he woke up in the morning, the woman was gone. Several months passed by without seeing the woman, until she showed her face again out on the streets. She was holding a basket and shoved it at him. She stated, "Good luck," and disappeared in a flash. Edmond decided to name the girl Anora, meaning light.

Anora and her father lived in New Haven, Connecticut. She and her father had an awkward relationship. Her father always brought home women Anora did not like. She was never liked back by the women. Her father always scolded her after she chased off woman by woman. When she was 10, Edmond brought back one woman who Anora gave the bad treatment like all the others. The woman did not mind her bad manners at all. In fact, the woman smiled and gave her a gift. It was a leather covered book with a crescent moon on it. Anora always liked books, even though she had been diagnosed with dyslexia and ADHD at 7 years old. Edmond and the woman, named Charlotte, were soon married. She and her step-mother grew very close. She loved her step mother very much, more than her father.

Anora lived through school rather normally, despite her disorders. She always went to an abandoned library with her step-mother after school. One time, when she was 13, she went to the library with Charlotte, just like any day. Charlotte let her go of to find a book on her own. She went down an aisle, and found a little bird. She walked up to say hello, but it suddenly flew up and appeared larger. It dived down at her as she screamed. It stopped and appeared confused. Charlotte came running by with a (celestial bronze) battle axe in her hand, and she sliced through the bird. It puffed into yellow dust. Anora was beyond confused. Charlotte explained how Anora was a demigod, half mortal and half god. She explained how people at a safer place sent Charlotte to protect her. She explained how Charlotte herself was a demigod, a child of Hecate. This was a lot to take in, but Charlotte helped her through it. She remained at home with Edmond and Charlotte.

When Anora was 16, Charlotte and she decided to go for a picnic in Central Park during spring break (April 2014). They were having a nice time since it was so early in the morning, and nobody was there. When they were at ease, 2 bird-like women came out diving at them out of the sky. They lunged at Charlotte and Anora, and they tried to fight them off, but they were outnumbered. Anora felt a scratch on her leg. Charlotte smiled faintly at Anora, and threw her black bracelet (that turns into a celestial bronze axe) toward her. She caught it and noticed a map tied around it. "RUN!" Charlotte cried, "Go to safety! They are distracted by me. Now go!" Anora ran, and she didn't look back. She was stuffed up with so many emotions. She stopped from exhaustion. She untied the map and read the directions. It went off to some place called Camp Half-Blood. She walked the rest of the way, mourning her step-mother.

How He Relates to Others
Relationships
Favourite Quotes & Misc
WIP
Theme
Retrieved from "https://camphalfbloodroleplay.fandom.com/wiki/Archived:Anora_Spera?oldid=1568652"
Community content is available under CC-BY-SA unless otherwise noted.