Camp Half-Blood Role Playing Wiki
Register
Don't have an account?
Sign In
in: In a Relationship, Minor Coding Issue, Characters,
and 11 more

(This Character Belongs to Koalaaipom)

Justin Troy met Apate in Toronto by running into them on a windy day. His suitcase popped open and he kneeled down to quickly gather things. The woman he ran into also kneeled and helped him. When their fingers met, Justin fell in love. Then they dated for six months, before Anton was born. Anton came on his father's doorstep, Apate said to take care of him, then gave Anton to a shocked Justin. Justin watched in grief as his love walked down the road, soon going out of his sight. He was so heartbroken he tried to give Anton to apdoption, but didn't, thinking that he might be the last reminder of his love.

Anton grew up as the kid who no one knew. That as in, no one knew his inner self. His emotions were often hard to read on his face, and his tone always stayed normal. When he was 4, his dad bought him a computer, but Anton never used it. Anton often would go out in his backyard and play football or soccer with his neighbor's kids. His father would often keep a fair amount of distance from Anton, who gave Justin too much memories of his wife.

When Anton was 12, he turned bad. He would often get low marks on testes, and would have to get them signed. But Anton didn't really show his father, he would forge his father's signature on to the test, then hand them back in. Then when report cards came, his father saw his D's. his father then home-schooled him, because they couldn't afford a tutor. His father was also hoping Anton would change. Anton refused to make any changes and kept touch with his old school mates. then, Anton would lie to his father and soon got into the habit of lying to everyone. After that year, he started dreaming and seeing weird things. Like once he saw this hairy goat leged boy who was screaming his name over and over in a dream.

Also, Anton had a monster attack when he turned 13. He had received a scar on his back from a harpy. Anton was by his old school when it happened, he had saw the human-chicken thing, panicked and then there was this sudden blackout. While Anton was knocked out, there was a friend of Anton's (Sam) who had fought the harpies off. Anton woke up with a 3 claw scar.When Anton hit 15, that was when bad changed to worse. Once, he tried to hijack a BMW. The owner founded out and called 911, but Anton had smoothly lied and said that he and his friends were just strolling by, unaware of anything.

Later on that year, he and his friend, Sam, were about to loot some candy from the candy store. When suddenly, a gaint dog popped out of nowhere. Then the hellhound's blood red eyes focused on Sam and Anton, then charged. Anton got tackled as the hellhound leaped, and Sam was left on the floor,the same hellhound on him. There was another boy who had tackled Anton, and then he ran to get Sam.

The fight was bloody but they finally managed to kill the hellhound, thanks to the boy's bow and arrows. But even so, they were all wounded. Sam had placed a hand on both of them and instantly the wounds started to heal. The boy said that he was named James, and then explained who Sam and Anton were. Then when Anton came home, he told his father about Camp Half-Blood and said he needed to be there. His father looked at him with sad eyes and nodded. Then they went to go tell Sam's mother, who turned out to be not his real mother.

Sam's mother had stopped them after they said "Mom/Ma'am we need to tell you that I/you son is-" and explained that she took Sam from adpotion, not knowing who his real mother/father was. Sam had choked up and said his goodbyes, then both of them left. James tried to be nice and upbeat by telling jokes, but it was not helping the two demigods. One day, Anton woke up just to see Sam committing suicide. It turns out that Sam had remember that his real family had died, and was stuck with sudden grief that he couldn't stand living anymore.

Anton tried to stop his friend, but Sam was already jumping off the cliff, his eyes on Anton. His last words to him was, "See you, Ant. Just....stay strong.". James woke up too late, and saw a sobbing Anton, who was holding his friend's watch. James took no more time waiting, fearing that Anton might want to join Sam. James gave him a short sword, watching Anton look at it like he was waiting to see his fate in it. Then they left. So two weeks later, Anton entered the gates of Camp Half- Blood, still holding Sam's watch, thinking how this was time to turn a new leaf.

Anton is kind and caring. However, he has a serious habit of lying. Anton is most likely to steal your things if he thinks it's 'worth the risk of getting caught'. He likes to pull pranks on the people he thinks are easy to prank.

Children of Apate are able to mimic sounds or the voice of a person or creature they already heard speaking or making noise. The quality of the mimicry depends on the focus and skill level of the user.

3 Months After Character is Made=== 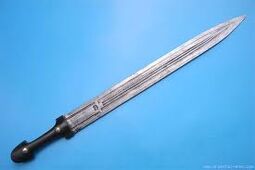 His sword that James gave him