A large sword that only he can carry

He is bold and proud of his creator and himself. He knows his skill is very high and isn't afraid to prove it. He enjoys fighting and will always show his emotions through actions. He doesn't talk much and instead will just wave or try to show something through and action.

After months and months of Broken Covenant attacks on Campers, Hephaestus was tired of the fact that there weren't enough people protecting the camp. He decided to make a very large robot that was very muscular and strong. He also decided to make a much stealthier and smaller robot, he then sent them to camp. The Smaller Robot was nicknamed Xanthus. Xanthus could talk easily but didn't enjoy it much. He much rather be quiet and alone. While Argyris, the muscular and big robot, couldn't talk. He was built without a voicebox due to the amount of pistons and equipment that was used to make him so strong.

Argyris enjoyed his duty. He loved the campers and made many friends. He didn't realize though, the anger growing within Xanthus. Xanthus felt the Campers used and abused the two, always making fun of them and calling them cold hearted. Xanthus eventually got tired of it and simply left. When Argyris went to look for him there was a confrontation between Argyris and a Broken Covenant Member. in the end Argyris fell over with his back ripped open and wiring ripped out. Argyris was shut down for a few months until Chet Decker found him. Chet repaired Argyris and while doing so, noticed something strange. Argyris was built without a voicebox. He was able to make one, small enough so he didn't have to remove any of the equipment that would cause him to weaken in strength. After repolishing and building Argyris Chet was able to turn him back on. Argyris was so happy he immediately hugged Chet, so hard in fact Chet was gasping for air. It was a comical moment as Argyris let Chet go gently and began to talk..... A lot. Chet talked to Argyris for hours until it was time for Argyris to return to Camp's Border to continue his eternal guarding of Camp.

This is Argyris' theme. The voice within it is what his voice sounds like 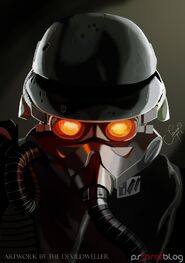 Me before being rebuilt.
Add a photo to this gallery

Retrieved from "https://camphalfbloodroleplay.fandom.com/wiki/Archived:Argyris?oldid=1747764"
Community content is available under CC-BY-SA unless otherwise noted.