Aura is a head strong girl and was a born leader. She’s proud of who she is. She’s also loyal, trustworthy and a bright girl.

Hannah met Zeus in New York. After spending some time together Zeus left and Hannah learned pregnant. When Aura was born she was put up for adoption because Hannah didn’t want a kid. Aura grew up in large foster home with four other kids. When she turned eight she was adopted by a couple named Rose and Jake. The couple was very nice to her, treating her like she was their own kid. At school she was liked by many people except the teachers. When she turned ten Rose died. Jake was always depressed and abused Aura. Every day after school Jake would yell at her and hit her. She hated the abuse but, stay with Jake so he wouldn’t be alone. . When she turned fourteen she ran away from home because monsters started attacking and Jake was getting more abusive. One stormy night she was running along a road when she got hit by a car. Zeus felt bad for Aura so he turned her into a storm nymph and he sent a satyr to get her and bring her to camp

Feather
Add a photo to this gallery 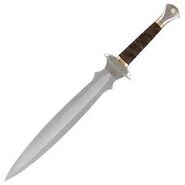 Add a photo to this gallery
Retrieved from "https://camphalfbloodroleplay.fandom.com/wiki/Archived:Aura_King?oldid=1152152"
Community content is available under CC-BY-SA unless otherwise noted.