This character belongs to ReesesPeaces

The bee who won't sting 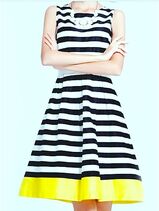 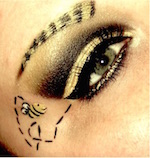 Bea is an extremely curious nymph, which is both a fatal flaw and a way to make new friends, as she loves to take walks in nature to explore. She can be quite generous, but on the other hand can be guilble. You can find her tending to bee hives, baking, or staring at something or other in curiosity. Curiosity and distractedness often go together, which you would know if you met Bea.

Persephone, after millenia of tending to her garden, decided it couldn't hurt to have some extra help to make her garden bloom and grow. She created a honey bee nymph to tend to the garden by keeping bees on task, sometimes helping the flower nymphs herself. The bees where happy, as they had more honey; the flower nymphs were happy, because they were healthy; but Bea was not satisfied. She was always curious and asking questions, and quickly discovered she could sneak away and and explore the garden herself, meeting new friends (nymph and bee alike).

The only person who could keep her still was her boyfriend, Jeremey, a communication nymph. The two met when Bea was wandering from a flower she was pollenating with a flower nymph named Lilly and a friendly bee that hung around her sometimes. Jeremey was bringing a message to a tree nymph, and well, the rest is history.

Bea loved to talk and help out the various hives around the garden, and they would share secrets about the sweetest honey their hives could make. Bea loves sweet things, naturally, and told on the hobby of baking (especially with honey). As a job, on the other hand, she would help heal nymphs and the occasional demigod with her honey. This way some of the best years yet for Bea, for she got to roam around and discover new things and new people.

Soon, however, she found out that there were limits to how far she could roam, as the underworld could be very dark and dank. One winter, when she felt perticularly gloomy (both because it was winter and because she felt trapped), Bea figured that, since Persephone was spending the winter in the underworld too, she could as the flower godess if there was somewhere she could go in the "outside world". So, while Persephone was tending to Lilly the flower nymph's flower, Bea approched her.

The godess barely remember the honey bee nymph, but figured Bea had served her long enough, and could always be replaced. Persephone knew of Camp Half Blood, and also that they might need another nymph to keep the bees in check from swarming the cabins. Bea agreed to serve the flower godess another summer (since she wouldn't be there) before being sent up to Camp Half Blood. That was one of Bea's most restless seasons yet, and she felt more trapped than ever. But finally, fall came at last.

Before Bea left, Jeremey visted her at her favorite hive, where the two said their solomn goodbyes, kissed, and broke up. So Bea arrived in the early autumn, greeted by a swarm of bees whom explained Camp Half Blood to her. Their hive was close to the cabins, and the bees promised not to bother the demigods if she tended to them nicely. Bea made the deal with the queen bee, Melissa, whom she would lead to a big patch of daisies as a thank you gift for welcoming her.

Retrieved from "https://camphalfbloodroleplay.fandom.com/wiki/Archived:Bea?oldid=1757047"
Community content is available under CC-BY-SA unless otherwise noted.