Brandon isn't very good at socializing. He's awkward around people and usually has trouble saying the right things. Because of this, Brandon tends to insult people without meaning to and usually never apologizes for it, either thinking he's right or that he did nothing wrong. Despite being unsocial, he is very intelligent and knowable. But Brandon has a dark sense of humor and sometimes struggles to understand normal jokes. He can be rather blunt and abrupt at times. If you can get past Brandon's rocky exterior, he can very loyal and protective, though its hard for him to show his real feelings.

Winifred Allan was a devout and almost fanatical Christian woman living in Queens, New York. But she was also a rather beautiful woman, which in turn attracted Hermes to her. The two met at a park near Winifred's home; Hermes introducing himself as Frank Rogers. Only a few months after their meeting, they began dating.

Winifred was head over heels in love with Hermes; to the point of sleeping with him out of wedlock. Two months after that, Winifred was horrified to discover that she was pregnant. But after telling him about the pregnancy, Hermes revealed his true identity.

Winifred was beyond furious. She denounced Hermes as a devil, and cursed at him and threw furniture and books at him as he fled. Winifred was left pregnant and heartbroken, but she turned her heartbreak into hatred for Hermes. Seven months later, on June 31, 1997, Winifred gave birth to Brandon.

As Brandon grew up, he had a very difficult childhood. His mother strictly raised him to be a consecrated Christian and if he disobeyed or did something, anything, that was not Christian like in his mother's mind, Winifred would beat him, call him the 'spawn of Satan', and made him pray for forgiveness.

Because of this, Brandon didn't trust easily and found it hard to make friends. When he first started school, he was bullied for his clothing and religion, but only a year or two later, the class grew bored and just began to ignore the boy. When he was almost 10, however, Brandon made his first friend, a girl was named Molly Williams.

Winifred never truly approved of Molly, thinking of her as sinful influence on her son. But even if his mother beat him more, Brandon continued being friends with Molly. When they were 12, Brandon began to tell Molly about odd things he had begun to see, such as a one eyed man trying to follow him into the school's playground. But Molly would always nervously reassure him that it was just his imagination.

But a few weeks after Brandon's 13th birthday, while at home with his mother, Brandon was claimed by Hermes. Seeing the symbol appear above Brandon's head made Winifred both terrified and furious. She screamed at him that he was the true son of Satan, proclaiming that if Brandon had stayed sinless, God would have forgiven him for his father's actions. Winifred then beat the boy worse than she had ever in the past.

When Brandon didn't show up to school the next day, a worried Molly went to the house. The door was unlocked and when she entered, she found a beaten and bruised Brandon on the couch. After Molly pleaded for a minute or two, a hesitant Brandon told her some of what had had happened, leaving out the part about his mother beating him (instead saying he fell down the stairs). But he did tell her about the symbol and once Brandon finished, Molly began to quickly explained that Brandon had been claimed by the god, Hermes, and that she herself was a satyr.

At first, Brandon rejected the idea, but then Molly stood, pulling up her skirt and showing off her goat like legs. Molly then explained further about Camp Half-Blood and that it would a safe place for Brandon. After thinking it over, Brandon agreed, wanting to get out of the home. As Brandon wrote a note to his mother, Molly gathered money for a bus. Afterwards, the two hurried towards the closest bus stop, where they boarded a bus heading towards Long Island.

The ride took over an hour, and when they finally got off, Molly tried to rush the still injured Brandon. Molly hailed a taxi, pushed Brandon in and quickly told the driver directions. When asked by Brandon why she was hurrying so much, Molly explained that they were in danger of a monster attack and without any weapons, they were unprepared and at the monster's mercy.

When they finally stopped in the middle of nowhere, Molly quickly paid the man and pulled Brandon out of the cab. But when the two were half way up the hill, a harpy attacked them. It clawed Brandon as it tried to pick him up. Brandon tried to struggle out of its grip, but it only made the harpy angrier. Seeing this, Molly lunged at the harpy, kicking and punching at it, trying to make it let go off Brandon. The harpy, surprised, let go of him and recoiled. Molly grabbed the injured Brandon and ran as fast as she could, with the harpy chasing after them. Fortunately, the two got through the gate, arriving in camp. After he recovered, Brandon stayed at camp with Molly, training, until the summer of 2012, when he was 15. It was at that time that Molly was killed bringing a different demigod to camp. Heartbroken over losing her, Brandon left camp, wanting time away to grieve.

Brandon, having no where else to go and wanting back a sense of familiarity, returned home to his mother. Seeing him at her doorstep, Winifred was going to shut the door in the boy's face, but Brandon desperately pleaded with his mother to let him stay. Winifred, after much thought, reluctantly let him stay. But things were tense between the two; Winifred spent most of her time ignoring Brandon and praying for forgiveness, while Brandon tried to forget Molly by starting to go to school again.

Things continued like this until a year later, as Brandon began to slowly heal and the living arrangement became bearable. But when Winifred walked in on Brandon using his powers to glide in his room, she began throwing objects at Brandon, screaming at him to get out. Brandon ran out of the room and out of the house, as his mother continued throwing books she had collected from his shelf at him. While trying to get away from her, Brandon accidentally ran into the middle of the street.

A woman driving her car, who had been previously distracted by her children, noticed Brandon too late and accidentally struck him. Brandon hit his head against the windshield, nearly killing him on impact. Instead, the boy fell to the ground, dying. Seeing this, Hermes took pity on his son and turned him into Communication Nymph. Brandon, seeing he could never have a normal life with his mother, decided to return to camp. 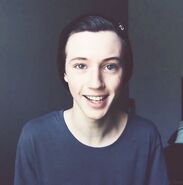 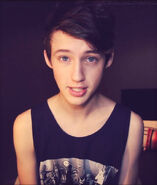 Retrieved from "https://camphalfbloodroleplay.fandom.com/wiki/Archived:Brandon_Allan?oldid=1552884"
Community content is available under CC-BY-SA unless otherwise noted.