Daughter of Love and Beauty

A twenty-year old Paris Roosevelt, of Spanish and English descent, met Aphrodite at one of the most romantic places in America, Amelia Island in Florida. He was working as a life guard, when he was awestruck by Aphrodite's beauty. He pursued Aphrodite, asking her on a date, to which she agreed. The two instantly connected, and within a few weeks, Aphrodite was pregnant with Calliope. Being a goddess, Aphrodite left but came back with baby Callie, and left her with her father, with a note stating she is in fact his daughter.

Paris took Callie out of Amelia Island, and fled to Manhattan, New York. Paris claimed to moving there because he felt his old lover was there. After three years, he eventually moved on with his life, and went to school to become a Film Director.

He often took a young Callie with him to watch him direct movies. This led Callie to enjoy theater, but eventually move on to music.

Growing up, Callie got into fights and had been attacked by three monsters before eventually going to Camp Half-Blood. Along with that, strange things often happened around her, often resulting in Calliope getting into kind of trouble or getting kicked out of school.

When Callie was six, she had a lot of trouble reading, it was the following year she was told she had dyslexia. At the age of nine, she was sent outside and to the office a lot because she couldn't stand still, she then tested positive for ADHD. At the age of thirteen, Calliope had her first encounter with a baby telekhine. When Callie started running away, the telekhine attempted to kill her, as luck would have it, a satyr was running by sensing the demigod, and manipulated surrounding plants to strangle the telekhine. Callie continued to run away as the satyr killed the telekhine. This made Paris sign Callie to self defense classes. At fourteen, they moved into Upper East Side of New York. When moving in, a harpy nearly killed Callie but a terrified Paris shot at the harpy with his rifle. Callie ran with the harpy chasing after her, Paris called Animal Control, thinking it was a bird. The harpy continued to harass Callie until her demigod abilities activated and she fired multiple of shells put of her palms, injuring the harpy enough to run off. Callie told her father what happened, but Paris dismissed it as a delusion, convincing her of it. Animal Control looked around but found nothing.

When she was fifteen, her father moved them to a house on Long Island.

On her sixteenth birthday, Callie was given a sea shell carved into a heart, with a pearl inside. The giver had no name, but Callie still felt attached to it. And yesterday, Callie was in after-school detention for fighting, and was attacked by a hellhound. Luckily, Callie's powers reacted and she oozed a dense plum of perfume suffocating the hellhound. One of the students serving detention, was the same satyr that protected Callie when she was younger, and he helped her understand about what was happening. He gave her his card, and the address to Camp Half-Blood. Not knowing what else to do, Callie convinced her father to let her go to Camp Half-Blood. He agreed, and Callie called the satyr and he led her to camp. On the way, a trio of harpies attacked the pair, and the satyr, Barrow, gave her a celestial bronze sword and shield; which she used to fight the harpies off. Callie managed to kill two of the harpies, but one of them killed Barrow near the entrance of Camp Half-Blood. Callie ran inside the camp before the harpy could get a chance to attack again. Two campers ran out of Camp, and killed the harpy. The harpy disintegrated into dust.

Subsequently to the death of the harpies and Barrow, Calliope was emitted in an red aura, and her cuts and bruises healed, and her clothes changed into an elegant rosy pink Greek dress, her hair styled into a crown braid, flora embellished in her hair, makeup done flawlessly, and a gold necklace with bracelets along with a ring with a shell as it's showcase.  She was then told she was a daughter of Aphrodite.

Callie is described as rebellious and courageous. She's adventurous and is not afraid to try new things. She can also be very impatient and quick-witted. She's very empathetic and sympathetic, often worrying about her loved ones. She's charismatic and very convincing. Callie has a creative mind and a very good memory. She's an excellent singer and talented actress. She is street smart, as she can pick locks and pockets, as well as change the tires of a car.

She's also fiercely loyal to the people that she loves. Callie is also very capable of taking care of herself, growing up her father signed her up for fighting classes after nearly being kidnapped at the age of five. She is strong-willed and determined and never backs down without a fight.

Calliope is a beautiful demigod with light skin, full lips, hazel green eyes, and short hair which she can manipulate it's length and color. Her hair is usually shoulder lengthed and dyed. She is tall with an athletic but slim figure. 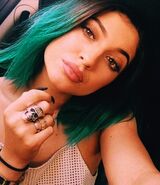 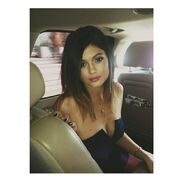 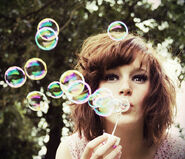 Callie's vocal tone is soprano, which her range is from octaves and a semitone Eb3-E7. Her agile voice carries very little weight with it and is vibrant and well supported all throughout the vocal registers. With great technique Calliope is capable of singing all the way down to a Eb3 with ease, exhibiting a smoky vocal texture. Her voice begins to showcase more power and character however in the upper belting and head voice registers where it finds its "ring". Many say she sings like Ariana Grande, Mariah Carey, etc.

Callie is very swift, and uses her above-average agility to fight in combat, along with the training she took when she was younger (boxing, judo, and Brazilian jiu-jitsu). Callie is extremely flexible, and is very well capable of taking care of herself, without the use of a weapon.

Retrieved from "https://camphalfbloodroleplay.fandom.com/wiki/Archived:Calliope_Roosevelt?oldid=1567012"
Community content is available under CC-BY-SA unless otherwise noted.