Culver is very much like Aphrodite. He can be very moody and vain, but at the same time be sweet and loving. He is very seductive and persuasive. He treats people that he likes very nicely, but if you get on his wrong side, you are dead to him. He understands feelings very well, and likes to talk about them. He also likes to talk about himself. Somedays it will be all about him, but he will make you feel special on occasion.

After the Animal Nymphs were created, Aphrodite kept Culver around because she favored him. She kept him to deliver messages, protect her special doves, shop, gossip, etc. Aphrodite genuinely loved having the spirit around. The two were exactly alike, and that is why they seperated. One day the two started arguing over which one of them was the more beautiful one. This of course infuriated Aphrodite and she did not want to see Culver anymore because she saw gin as a challenge. So she sent him down to camp so she wouldn't have to deal with him. 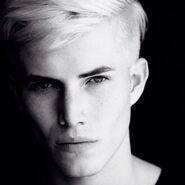 Retrieved from "https://camphalfbloodroleplay.fandom.com/wiki/Archived:Culver?oldid=1661710"
Community content is available under CC-BY-SA unless otherwise noted.