For years, the gods and goddesses have watched on while the humans developed through the ears, as they advanced both personally and technologically. Lately one thing has become quite clear to them; humans have a habit of being very irresponsible when it comes to their environment and the animals that reside within that environment. They came to a decision, fearing for the safety and longevity of their sacred animals, they have decided to create a special group of nymphs to help protect their sacred animals.

Danae is quite cold, bitchy and judgmental. WIP.

Danae has long dirty blonde hair, hazel eyes and full lips. She stands at 5'7" and has a rather athletic figure. She has a bohemian/indie/hippy style, and wears a lot of bracelets, rings, etc. She is able to turn into a vulture.

In vulture form
Add a photo to this gallery

Her necklace, a gift from Ares.
Add a photo to this gallery

As an Animal Nymph, and more specifically a Vulture Nymph, Danae is able to: 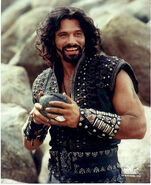 Lord Ares
Add a photo to this gallery
Retrieved from "https://camphalfbloodroleplay.fandom.com/wiki/Archived:Danae?oldid=1698035"
Community content is available under CC-BY-SA unless otherwise noted.