Member of the Spartans Gang

Devynn is a major Alcoholic. He drinks a lot. He is gay, and never would have a relationship with a girl. He is basically a seductive gay and has done a lot of guys. He loves his gang, but he would never admit it. He loves the color red. He likes sports and swimming, especially in the ocean. He is very brave and cruel when he needs to be. He has no mercy for his opponents. He i a major flirt and basically a bad boy. He is often irritable and easily angered. He is fond of dogs. When in a calm state, he is lethargic and apathetic, showing more emotion when angered.

Alex met Lyssa when he ran into her on the sidewalk. They started to talk and eventually started to date. 2 days later she left. Later, on December 31, a baby was outside his door in a basket and a note explaining who Lyssa was and what Devynn was.

Devynn grew up with his dad and the gang. Devynn went to school, but didn't enjoy it. He made bad grades and bad choices. Him and his friends would always pick on others. In middle school Devynn started alcohol. He also came out as gay in middle school. He was very seductive and had many boyfriends, some who were originally straight. He of course lost his virginity to his first boyfriend. When he was 15 his dad was killed in a gang fight. Devynn was depressed and became antisocial and started to cut himself. He had to live with his father's gang. The new leader of the gang, Mike Howler, forced himself on Devynn. This just made things worse for Devynn. He lost all of his friends and became invisible to everyone. Soon he dropped out of High School and ran away from the gang.

While he was on the run he tried to find the man that killed his father. He looked for months in every gang in the city. He would spy on the gangs and he got caught by many of the gangs. He was beat by every gang that caught him. Also while searching the city he, he was attacked by many wierd creatures, like a vampire woman(Empousa), weird snake woman(Scythian Dracanae), and a hug dog(Hellhound), but every time the monsters turned into gold dust, with many arrows mixed in the pile. He always saw a shadow behind him when he was attacked but never saw what it was. He finally found the right gang and killed the man. the rest of the gang were getting ready to attack when the police arrived. The police caught him and put him in jail.

While in jail he fixed himself up. He swore he would never cut himself or do anything illegal again. While in jail, the prison was attacked by a Giant. The Giant tried to kill Devynn but he went under the giants legs and ran for a forest on the other side of the jail. Devynn was found by the Spartan Gang and he joined. After a few years with them, he started to love them like a family, but wouldn't admit it. He was also claimed by Lyssa. The gang told them that they all were demigods and they explained who his mother was. He also didn't cut himself, but he was still an alcoholic. The gang eventually came to camp. 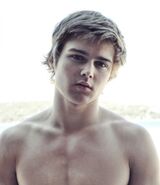 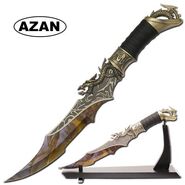 Devynns's Dagger
Add a photo to this gallery

Retrieved from "https://camphalfbloodroleplay.fandom.com/wiki/Archived:Devynn_Hartlington?oldid=1661033"
Community content is available under CC-BY-SA unless otherwise noted.