Evelyn is cold and doesn't trust people. She is sometimes short-tempered. She may hate the immortals and mostly her father Apollo, but she loves music and has pure musical talent. She isn't friendly at all and doesn't make friends easily. She is a smart young woman. She acts like she doesn't care, but inside she is still a hurt girl, who misses her mother.

Evelyn has straight, red-brown hair. Her eyes are hazel and have an almond shape. They are always cold, with no spark of happiness in them. She stands at 5'9" and is well built. 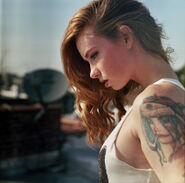 December 1993, New York. Alexis Parker, was at the cinema, with a group of good friends. Her friend Sasha meets her with a man named Seth. The two fell in love and after a week started dating. Alexis' family was wealthy, but old-fashioned, they didn't approve her choice. So she ran away.

A month after she became pregnant. Seth stayed with her and supported her. On 22 November 1994 Alexis gave birth to a healthy baby girl. She named her Evelyn. A day after, Seth was gone. Alexis never had worked in her life and without Seth she couldn't make it. She decided to go back to her parents. They welcomed her back and somehow didn't get mad about Evelyn.

The girl had a very beautiful childhood. Sometime when she was fourteen, her mother met a George and they got married. It was then when Seth returned and told her the truth, that he was Apollo the god of sun and music. He told her that he still loved her, but he couldn't stay. He also said that he didn't want her to be with another man. Alexis refused to listen and asked him to stop bothering her. Apollo went mad. He cursed Alexis and she lost her mind. She killed George and even tried to kill Evelyn, but a woman named Cassandra, saved her. Then Alexis killed herself.

Cassandra turned out to be a Centauride. She toled her about her father and taught her how to defeat herself. Evelyn learned how to use a bow with arrows and a dagger. Cassandra tried to tell her about Camp Half-Blood, but the girl didn't even want to hear about it. A few years passed and she heard about Broken Covenant and more specifically, about Opus Superum. She learned about their beliefs and decided to join them.

Retrieved from "https://camphalfbloodroleplay.fandom.com/wiki/Archived:Evelyn_Smith?oldid=1697341"
Community content is available under CC-BY-SA unless otherwise noted.