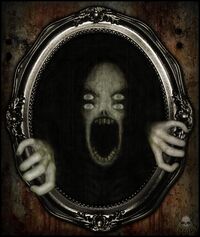 Phobos and Deimos were bored out of their heads on Olympus since the world was getting calmer. So the twin gods had an idea to deal with this. They would create a fear nymph made of pure paranoia. With the help of some dryads, Phobos and Deimos created a young girl with their powers of paranoia. The girl sprang to life after Phobos and Deimos were done. The girl was not beautiful but they knew it was enough for a fear nymph. However, they knew it was enough. With the help of cloud nymphs and other nymphs on Olympus, she was taught the ways of being a nymph. The nymphs gave her a nickname "Fright". Most nymphs did not like her because she looked like a freak with dried up skin. Fright was abused the other nymphs who originally taught her. Fright's life was in completely turmoil. One of the cloud nymphs went too far and started to attack her. In her self-defense, she accidentally summoned voices in the nymph's head. This drove the girl literally insane for a while. When Hera discovered that her favorite cloud nymph was driven insane by Fright, she ordered her banishment from Olympus. Phobos and Deimos tried to argue that the girl was acting just out of self-defense. After Fright was kicked out of Olympus, Phobos summoned a raven to guide her along the way to Camp.

Fright has issues with her self-confidence. She is very sensitive and shy. She will behave very psychopathically when attacked. She has selective mutism which allows her not to speak to a person and will merely stutter. She is very self-conscious. The only thing she fears is her appearance. She does not look at mirrors due to this. Her positive aspects are that she have great judgmental skills and is quite empathic. Using her powers, she helps people overcome their fears. She is also very inquisitive about the new world she is in.

Relationships
Retrieved from "https://camphalfbloodroleplay.fandom.com/wiki/Archived:Fright?oldid=1187203"
Community content is available under CC-BY-SA unless otherwise noted.