Henrie is much like his creator, Hestia. He is mild mannered, upstanding, charitable, and a protector. He never takes part in any disputes or wars. He minds his own business amidst a community who engage in 'high drama'. He likes to stay as close as possible to the hearth in Hestia's cabin, and does not venture far. All around he is a very nice and caring person. He is bisexual, and does date, which is the only thing different fro Hestia.

When Hestia's cabin was built, a fire was placed in the middle of the cabin. Hestia felt that someone should tend and guard these flames, so one night she went down to camp, and entered her cabin. Out of the flames, she formed a fire spirit. She named him Henrie, and told him about why he was created, and that his purpose is to watch her flame. He understood his job, and that night he slept in the cabin, and he does so every night, guarding his creator's flames. 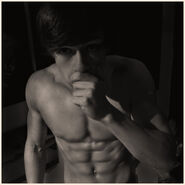 (Unlike other Fire Spirit/Nymphs, he has a life force, the hearth in Hestia's Cabin.)

Retrieved from "https://camphalfbloodroleplay.fandom.com/wiki/Archived:Henrie?oldid=1661391"
Community content is available under CC-BY-SA unless otherwise noted.