Girl on Fire / Maknae of G.O.M

Brown, tends to dye it sometimes

Ka-eun or Kara is a stubborn yet nice girl. Although, she tends to be quite immature at times. She'll say 'daebak' a lot at the most random times. She's quite short but she has a really stunning voice. Ka-eun is a trouble maker and can be a real bitch sometimes. She'll complain a lot and whine like a spoiled brat. She's very much like a little kid to be honest. She doesn't really care about anything, although she is really kind and sweet to her members and she treats them like family. With other people she can be really awkward if she doesn't know them. To be honest, she's really annoying and can be a diva sometimes and not really care about anyone like always. She doesn't get creeped out easily but she does with 'saesang' fans (stalker fans >.<).

Hwang Ji-hae was a famous ulzzang/model who became famous for her looks. She had a young daughter who was two years-old. The young girl was called Hwang Cho-rong, a daughter of her and her ex-husband who past away due to an illness. Cho-rong was a handful and since her husband was never there to help her since he was always working and she was working. She was also a jewelry designer and the fact that her young daughter was in the house and played with some of her jewelry that she was going to sell irritated her and worried her that she might play with it or hurt herself by wondering around the house. One day she met Hyperion, disguised as a man named Lee Jong-hyun. She caught his attention and you could say it was love at first sight. One-sided love. Ji-hae met him in a coffee shop and they became friends quickly. Slowly, Ji-hae was falling in love with him. Her husband didn’t know of course..

She soon had an affair with him and they began dating. Her husband had no clue at all. A few months later she was pregnant. Ji-hae was worrying and had no idea what to do. Hyperion explained about how he was a god and that once the child was born he had to leave. Ji-hae didn’t want this to happen but she nodded and sighed in agreement. Hyperion left the moment the child was born. She decided to call her Ka-eun. She stayed away from her husband for quite a long time in her mother's house explaining that her mother was sick but she was actually pregnant.

Ji-hae explained to her husband that she had an affair and that she was pregnant. Of course he didn’t care and said that he was having an affair as well. Ji-hae demanded a divorce and it happened. The two divorced and Ji-hae said that she was taking both of their children. The thing was it wasn’t their children it was her children with someone else. Her ex-husband didn’t know though and thought the girls were his children. He would visit them often when he didn’t have work and it surprised Ji-hae since he never had time for her.

As Ka-eun grew up, she was a quiet child who never got to express her feelings. She disliked it and never talked to anyone. Unlike her half-sister Cho-rong who was always center of attention, the popular girl and of course ‘little miss perfect’. Ka-eun was just the shadow who played her guitar where ever she went. Ka-eun loved music for some reason; she would always play and sing songs. By the age of ten her mother who remarried to another man named Aaron Kim. Aaron was the CEO of a huge company and friends with loads of famous people. Ka-eun never bothered to talk to him. She would never talk to her family unless she had too. Her mother tried to talk to her and so did her sister and Aaron but she ignored them and played her guitar and sang.

By the age of thirteen, she decided to move away from Gangnam to Seoul where she became a bit of a wild child. Her grandmother was a demigod daughter of Zeus who Ka-eun actually bothered to talk to. Cho-rong on the other hand in Seoul went into the hospital due to a illness and died a few months later. Ka-eun loved her grandmother and her ‘father’ lived closer so she visited him more often. She made friends who were rebellious young teens. Soon a few months before her fourteenth birthday, Ka-eun was attacked by a dracnae in the forest while camping out with some friends. She was away from the sight since she was finding some wood. The dracnae attacked her and she started to run but was saved by the hunters of Artemis, Ka-eun was interested in them and after an explanation of the hunt. Artemis asked if she would like to join and she accepted. She explained to her grandmother about everything and she accepted the fact that she was joining.

Staying with the hunt was quite calming for her, she enjoyed and treated everyone like her new family. She was happy, but she started missing music and losing interest a few weeks later. A few months later before her fifteen birthday. Ka-eun thought about leaving the hunt and ended up leaving. Artemis agreed though. She went back to live with her grandmother though. At the age of fifteen, Ka-eun decided to switch entertainments. But that meant she had to audition again for some reason. Usually it didn’t happen but with Kim Lee Records entertainment you had to. She sang B.A.P’s 0 (Zero), she was immediately accepted due to her voice and looks. Although that wasn’t the hard part for her, she was constantly training and dancing till the point where she’d exhaust herself. Although she wanted to debut so she had to do this. She made a few friends there but she knew that it was war between them, those who debut were stars but those who didn’t were stuck with training.

Group history:
But soon along with three more hand-picked teenagers, the members of the Generation of Miracles (fans shortened it to G.O.M.) were born, registered under the Kim Lee Records. The news of the new K-Pop band flashed across South Korea like a bolt of lightning, and many expected for heartily tunes that would hit the charts. Their uprising fame was steady and quick, considering the natural talents of the four members. In a few months, they were fully recognized by the Korean people, and international fame was on its way.

However, during their trip to one of their concerts, they were attacked by hellhounds, an amount more than one demigod can expect, considering that there were four of them in one vicinity. Fortunately, a group comprised of four satyrs happened to pass by and sensed their predicament. They were saved, and was told to go to camp. Seung Yoon and Ka-eun rejected the offer, placing their performance over the danger of being killed by monsters. After a lot of quarelling, Dae-Won, being the leader, decided to let Seung Yoon and Ka-eun go the concert's venue to hold it off, while he and Chin-Hae make private arrangements and preparations for their flight to the States. The satyrs insisted on coming with them, but they said that it would attract more attention, so they decided to meet at New York.

Seung Yoon and Ka-eun took a cab to the concert venue, but the driver had other intentions. In actuality, the mystery driver was a mercenary sent by a rival recording studio, who had a really bad blood with the Kim Lee Records. The long feud for fame fueled the rival studio with enough rage to take down the members of the Generation of Miracles as their greatest threat yet. The driver drugged them with hypnotic substances dissolved in water, which seemed like harmless drinks at first sight. The demigods were isolated inside the very plane the four have meant to use.

On the other hand, Dae-Won and Chin-Hae were already done with their preparations and headed to the concert venue to meet up with the others, without even knowing that the plane they have arranged had been used to hold their friends. But when they got there, Seung Yoon and Ka-eun were nowhere to be found. Their worries were intensified when the mercenaries found a way to broadcast their bait to them on the concert stage's large screen. Dae-Won and Chin-Hae unwittingly took the bait by deciding to save their friends. They went for the private plane after that.

Upon arriving, they confronted the captors, but they were incapacitated quickly. The pilot was actually a henchman of the mercenaries, and he operated the plane to take off to fly them to the US for human trafficking. During the plane ride, Seung Yoon managed to cut off his bonds and rescue Ka-Eun before one of the mercenaries caught them. Ka-Eun was accidentally shot dead, while Seung Yoon bled to death after receiving five bullets. When Dae-Won and Chin-Hae found out about this, they awakened to their powers out rage and killed everyone else, but during the rampage they damaged the plane's engines, causing it to plummet to the sea.

When the plane crashed with a burst of fire, the aviation petroleum tanks caused a spill on the water, and Chin-Hae was unlucky to swallow a very large amount of its contents. Dae-Won, on the other hand, was severely burned, and after a few minutes of fighting for his life, he drowned and sank in the dark waters. Chin-Hae floated mindlessly on a piece of the wreckage, slowly dying from poisoning. By the time day broke, he succumbed to its effects.

When the demigods haven't arrived at the time expected, the satyrs decided to find them when a flash of light appeared before them. From there were the four demigods, reborn as spirits/nymphs: Kae-eun a light nymph, Seung Yoon a moon spirit, Dae-Won a healing spirit, and Chin-Hae a dream spirit. After their transformation, they decided to stay at camp for a while to take a time off and think of their next move. 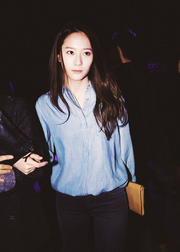 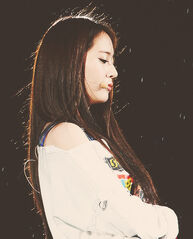 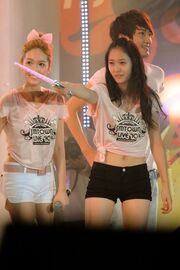 Retrieved from "https://camphalfbloodroleplay.fandom.com/wiki/Archived:Hwang_Ka-Eun?oldid=1517349"
Community content is available under CC-BY-SA unless otherwise noted.