This character belongs to ShadowStrikeV2

He usually wears a white, hooded jacket with a black T-shirt underneath, regular blue jeans, and red&black sneakers. After he made it to CHB, immediately set out to create a battle suit for himself. This battle outfit includes: A white, hooded cloak. [Try to imagine an Assassin’s Creed cloak&hood.] With a black sword sheath on his back. He has a loose fitting belt that slants slightly. This belt has the image of an owl with an angled spear behind it, embedded into it’s golden buckle. These images are to honor Athena, his mother, and giver of wisdom. With this he wears baggy blue jeans and greek greaves. He completed this suit on his 6th day at CHB. 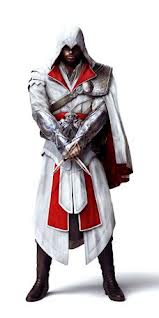 Being part irish, he is, stereotypically, hot tempered and easily annoyed, but he hides his anger well, and this does not make him reckless, although he does become passive aggressive. His dad has taught him to be able to keep his calm and have a level head even when under tremendous pressure.

Being a child of Athena, he is exceptionally intelligent and an extremely fast learner. Because of this, he is easily frustrated when people don’t keep up with him (intellectually) and becomes very sarcastic. This has become a bad habit for him, and he will commonly make sarcastic remarks, even when unagitated.

Although he is ADHD you wouldn't be able to tell without looking at his eyes. This is because he has learned to focus his energy into trying to familiarize himself with every single detail of his surroundings until he can find his way around with his eyes closed. So you don't see him 'twitching' unless he's uncomfortable. His efforts to familiarize himself with his surroundings are extremely visible in his eyes. They will dart around and he has trouble looking people in the eye when talking. When angered, however, it becomes the opposite. He will look his, 'opponent' (for lack of a better word) in the eyes and his hands begin to 'twitch'. When uncomfortble or anxious, he shows all the signs of ADHD very visibly.

James is very shy with new people and very reserved. He doesn’t like to open up to anyone about what he thinks or feels unless he’s comfortable around them. His feelings are personal to him and he will rarely let them out.

Lastly, has a soft spot for girls. Being the son of an old fashioned southern man, he was raised being taught that he was to protect and respect women. In other words, he is a typical southern gentleman.

Athena was observing a battle in the First Gulf War, when she noticed Ryan Raider, a mortal military captain, and his knack for battle tactics. She payed close attention to this mortal, for was clear sighted. She watched over him in Afghanistan and protected him in battle. Once, while Ryan was busy working on battle plans, she approached him in the form of a female soldier. She gave him advice and her thoughts on his battle plans and helped him improve his work. Athena admired his brilliant mind and after thier encounter she gave Ryan her blessing, which caused him to make better battle plans and greatly enhanced his own fighting capabilities.

After the the war ended, Ryan retired from the military and started an antique weapons shop in a small Texas town. He and Athena often met at a local coffee shop. Over 3 months they did this until, finally, Athena's and Ryan's minds were unified, and thus, James was born. After James' mental birth, Athena felt obligated to tell Ryan of her true nature and that ancient greek monsters would come after their son. She then she left them, but not without giving them a gift. She gave Ryan a celestial bronze, brass knuckled combat knife, and instructed him to give it to their son on his 13th birthday, she also gave him the location of CHB, for when it was time for their son to go.

His dad did his best to raise James on his own. At the age of 4 Ryan began to homeschool James, and did this for most of his life. When James was 6, he started to show the talents and abilities that children of Athena tend to have, he was skilled in subjects such as math and science, though he was slow at things such as english and spelling, due to his Dyslexia. James was 7 when his dad began to teach him martial arts. His dad got him LEGOs on his 8th birthday, and he began making elaborate constructions with them. By age 10 James had mastered several martial arts that his dad had been teaching him, so Ryan decided to instruct him in the use of combat knives. When James became 11, Ryan thought it best to move closer to CHB in case of an emergency. They moved to the smallest town he could find in New York. After James had settled into his new home, his dad sent him to a school for military children which was located on a military base. His dad believed this would make him a less likely target for monsters. James could never make friends in his school, due to his shyness and the fact that all the kids already had their own groups to hang out with, no one ever really talked to him. James was able to live a normal life up until he turned 13.

On James’ 13th birthday, his dad told him everything, from who his mother was to the fact that he’d be chased by ancient greek monsters. Ryan also gave him the celestial bronze combat knife, as Athena had instructed him. James’ first monster attack was by a harpy, which grabbed, and almost kidnapped him. He was able to get away thanks to his martial arts training and the celestial bronze combat knife his dad gave him. He tried to live a normal life for 2 years, but was continually attacked by monsters that were getting increasingly powerful. At 13 he was attacked by 2 harpies. He figured if he were going to kill them (As he did not know monsters reformed) he was going to need to get rid of their wings, which he couldn’t do so easily out in the open. So he tricked them into following him into an enclosed area, a public restroom, where their wings were of little use. There he easily dispatched them. When he was 14 he was attacked by 3 stymphalian birds. While running around the town he noticed they avoided loud noises, so he lured them into the subway where there was enough noise to completely disoriented them. After James became 15 he was attacked by a chimera in his own living room. His dad was able to distract it by firing an antique Thompson Machinegun. They were unable to defeat it and fled in Ryan's car to CHB. James Raider has only been at CHB for 1 week.

History: James found Spirit in the forest at camp. After seeing the bird he had a sense of uneasyness. Being a child of Athena James had the ability to order owls to do certain things, so he, instead of ordered, asked the owl to take a look around. The owl obliged happily and found a hellhound near by. After recieving this information from Spirit, James was able to kill the hellhound before it found him. After that however, the owl had never left him. Spirit took a liking towards James and followed him almost everywhere. Eventually James took Spirit in as his pet.

Abilities: Empathic link with James (As he is a son of Athena.) Spirit is a predatory bird so he knows how to hunt. Spirit is extremely inteligent, a side effect of being talked to, telepathically, by James so often.

Lives: Spirit is kept in the forest near camp, where he can hunt, be free, and stay close to James.

Retrieved from "https://camphalfbloodroleplay.fandom.com/wiki/Archived:James_Raider?oldid=1629223"
Community content is available under CC-BY-SA unless otherwise noted.