Jasmine Jarvis is a 19 year old child of Persephone.

Jasmine was born to Ken Jarvis and Persephone. Ken was an indie singer, who was trying to make a fortune for himself by performing at small gigs and bars, trying to somehow find himself a deal with a record label. It just so happened that during a particularly crowded gig, Ken met Persephone. The Goddess had stumbled upon the gig during her tenure away from the Underworld. She decided that this opportunity could be used to find a more...handsome suitor, even if only for the night. Ken himself was quite good looking and so when they met backstage, they immediately felt attraction. One thing led to dinner and then to a brief one night stand. Or at least, that's what Ken thought.

Persephone of course was pregnant with Jasmine, unbeknownst to Ken. He continued his music career, moving from state to state, trying to pay the bills when one day, a golden basket was left outside his trailer. He almost considered dumping the baby or leaving her at an orphanage. But some chord was struck in his heart when he looked at her face, he simply couldn't just leave the baby out. So he took her in.

Life's never easy for a single father who happens to be a travelling musician with a toddler. Ken's hectic schedule had little time for caring and nurturing a young child. So he hired cheap help, but they could never stay for long. As Ken toured around in his little van, he had to hire nannies to look after Jasmine. Luckily, due to Ken's constant movement, monsters couldn't get a hold of Jasmine - they'd never stay in one place for too long and this meant that she remained unnoticed - for now.

Eventually, Ken settled in California, with Jasmine, when she was about seven. He'd often neglect her, leaving the state for concerts and such, always going away for "business". He had someone to take care of her though, like a live-in nanny. She was a satyress, and had (rather luckily) sniffed Jasmine out. Using the guise of a nanny, she was able to ward off monsters. Eventually, when Jasmine turned 11, she was attacked by a couple of harpies, which led the Satyress to take Jasmine away to safety, and to explain to Ken about the whole demi-god situation. Jasmine was taken to camp and has been there until her seventeenth birthday.

Recently she left camp, to visit her father, as she had little communication from him. Only, when she got home, Ken was dead on the floor, body rotting, with bloodstained furniture and broken glass. The place had been attacked by hellhounds, so it seemed, from the black fur left on the floor. She stayed in California for a while, so to clear up the house and attend the funeral. She didn't go back to camp straight away, spending a month in Cali, for some time alone, before returning to Long Island. 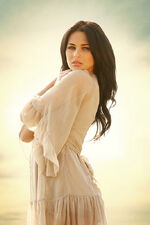 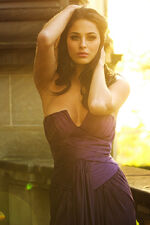 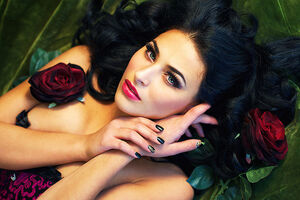 Add a photo to this gallery
Retrieved from "https://camphalfbloodroleplay.fandom.com/wiki/Archived:Jasmine_Jarvis?oldid=1463564"
Community content is available under CC-BY-SA unless otherwise noted.