Camp Half Blood/ Her Sister and friends

Johanna is a tomboy, although she still likes pink. In fact, she loves every colour of the rainbow. She is jokey, and very protective of her sister. She finds it hard to show her feelings. She is bi-sexual. She loves baking and her favourite shows are How I Met Your Mother and Doctor Who. She loves wearing bow ties, and her room if full of Doctor Who posters, and How I Met Your Mother one's too. She has some doctor who plushies. When nervous, she often shakes a little.

1ST October 1994, Copenhagen. A young man walks home with his friends, when a beautiful woman catches his eye. He tells his friends to keep going, and he’ll catch up, and approaches the woman. She introduces herself as Lea, and that she was visiting from America. She agreed to go on a date with him, and they fell deeply in love. After a year, they had baby girls, born on the 31st October, 1995. One was clearly bigger than the other. They both had a blonde tuft of hair and blue, slightly dark grey eyes. ‘Lea’ took the larger one, and named her Johanna and the smaller one Hanna. Lea stayed for a few days, and then disappeared. She left a note, saying she was Hecate/Athena/Aphrodite, a Greek goddess, and that she had to return to Olympus. The note was tied to a parcel wrapped in newspaper. Jacob untied it, and inside were two gifts for the girls. For Johanna, a necklace that ransforms into a bow and arrow. For Hanna, a book about all mythical creatures and twin daggers. There was a map to a place called camp half blood. Jacob tore the map, not wanting to lose his last reminder of ‘Lea’. Five years later, he couldn’t take it, and put a bullet in his head, leaving his daughters to his mother.

Their grandmother, Sofie, had once been a huntress of Artemis. She knew they were demigods. Deciding it would do them no good, she told them exactly how their father had died. They were going to find out somehow, best to get it over with. When they joined school, they were both unpopular because they had dyslexia and ADHD. But Johanna managed to make everyone love her, whilst Hanna was left, all alone. She was basically a target for bullies. She was super smart, a bookworm, small, although only slightly smaller than her sister though, and was thought of as a wimp. But Johanna always defended her when she could. They adored their grandmother. She was fun, exciting, and kind. But she died when they were ten, which meant the girls had no more living relatives.

They were taken to an orphanage, with half of the map to camp left. Their grandmother had it and had written it was in New York, and that it was only how to get to the forest, not to the gate. The back also said they were demigods. Children of Hecate/Athena/Aphrodite. They were to have their weapons, bow and arrows for Johanna, Daggers for Hanna, on them at all times, in case if an attack. The two started trying to do jobs for people, like looking after pets, cleaning the garden, e.t.c. When they were old enough, they babysat. It was all to get enough money to fly to New York. At 14, they were attacked after school. Johanna’s locket transformed into bow and arrows, and she shot several arrows at the monster, a hell hound. Hanna threw a dagger at the monsters eye. It howled in pain, and Johanna quickly yanked it out for Hanna, then continued to shoot it as they ran away. They got back to the Orphanage just in time.

The Orphanage scared them. It was cold, dark, and the three men working there were the worst. Every night, they took five girls, and one boy, down to the basement, claiming it was just for an inspection. But one night, curiosity got the better of Johanna. She dragged Hanna down with her, and found in the basement, the kids that had been taken that night being raped and beaten. They ran back to bed, and Hanna crept into Johanna’s.

Two years passed, with no more monsters Luckily, they were never taken to the basement.. It was their 17thbirthday. Some of the kids had even gotten them presents. Only small ones. Some were just drawings from school. Some were stolen stationary. And one was a book to help them learn English, stolen from the school Library. The girls were so grateful. They had reached the amount of money they needed to fly to New York, and were ready to run away that night. They had revived passports the week before, and had packed everything. At night, they said fare well to the kids Hanna hugged the few children, all younger than her, that were nice to her. Johanna said goodbye to everyone she liked, and even kissed her crush on the cheek. At Night, they got ready for bed, then three hours in, got dressed into warm clothes, grabbed their rucksacks, full of their few possessions, and climbed out of the window, climbing down by putting their hands and feet into the cracks of the wall. They ran to the airport, and paid the money needed. They got on the plane, and waited to arrive in New York.

When they finally arrived, they wasted no time and started trying to find camp. They followed the map, and found their way to the forest. But once they were in there, they had no clue what was next. They spent about an hour trying to find the gate, but gave up. They sat in a tree, and were about to eat the sandwiches they had brought, when they saw a person, wondering around. They jumped down from the tree, and asked for directions. He showed them to the gate, and introduced himself as Avan Bachelder. They both became good friends with him, soon developing crushes on him. Hanna decided to ask him out, and they started dating, which upset Johanna greatly. They received two dogs and a cat from their mother. They started to love camp, settling well. 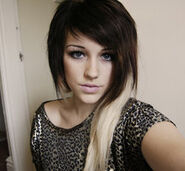 The Dogs she shares with her sister, Joey and Eddy

Her with two of her friends back in Denmark. She's the blonde one. 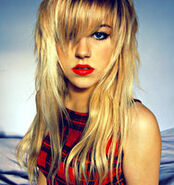 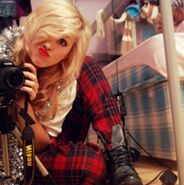 A guitar pick from Avan Bachelder
Add a photo to this gallery
Note: All the pics are the same model.

Johanna has naturally blonde hair, but dyes it so often it rarely stays the same. She has white skin. Her eyes are bluey gray. She is taller than her sister, and slightly larger than her sister, but only just. She stands 5'10". She is slim. She wares basically anything, but loves plaid and army boots. She isn't identical to her sister, only sharing her eye and hair colour.

Retrieved from "https://camphalfbloodroleplay.fandom.com/wiki/Archived:Johanna_Larsen?oldid=1565391"
Community content is available under CC-BY-SA unless otherwise noted.