Jude knows very well how to get along with people. He knows when to joke and when not to but sometimes he can just intentionally annoy someone if it gives him entertainment. While he may seem very irritating sometimes, he has a heart for those he care for especially his family. He gives his best when he is asked to do something. However, he doesn’t take orders from just anyone.

Everybody thought Jude was human. Even he thought he was normal but he is actually a demigod. Victoria, his mother, has been working in a bar as a bartender for years. One night, an unusual looking man came and ordered a drink. He didn't look that good but then Victoria felt something different about him. The two felt attracted to each other the first time they saw each other and so the man bought Victoria a drink then talked and talked all evening until, of course, they were drunk. The two went straight to a hotel to stay and we all know happened next.

Victoria got pregnant and bore Jude after nine months. After the night the man and her stayed together, she never saw him again. She never even got his name and never knew that he was actually a god. As a single parent, Victoria did her best to take care of Jude no matter what it takes. She doubled her hours of work just to make sure she could provide for Jude’s needs. She was able to take Jude to a nearby school and he did remarkably well. Jude got along with the people around him. As he grew up, his mother would teach him things about bartending but, of course, would never let him work since he was still young. He would just help around the bar like cleaning the place. He also had this hobby of disassembling things such as a tv remote control then later on, he'd be reassembling it as his toy robot.

Years later, Victoria met a man, Franco, and they fell in love. They eventually got married and had a daughter named Hannah when Jude was ten years old. Franco worked abroad and so he was rarely with his family but Jude did his job as a brother to his sister and a son to his mother. Unfortunately for him, they later found out that he had dyslexia. They decided to bring him to the doctor after seeing that he still had difficulties in reading and writing at the age of ten then at the same time, they also found out that he had ADHD giving him a hard time concentrating in school. As a result, he was not able to perform that well in class although he did try his best every time. Because of his situation, it could not be avoided that some people would bully him such as some of his classmates.

Turning ten, there wasn't any much unusual sightings for him yet and it continued to till he was twelve although he did witness a weird happening such as a human suddenly turned into a rabbit then it hopped away. Little did he know that it was a nymph but he just ignored it and thought maybe he was imagining things. When he was eleven, he saw a strange looking dude with the coat and a fedora but where his feet were supposed to be... AH! There looked like hooves. He didn't want to bother the man and thought perhaps it was his halloween costume or something so he just let it slide. That was when he was eleven. When he was twelve, he saw an even more intense event--demigods who seemed to be fighting for their lives... he wondered if what he was seeing was right. It looked like a chicken monster they were fighting but he just thought of running since he didn't want to get involved or anything.

Jude was already thirteen and his mother was getting weaker and weaker everyday. One night, Victoria forgot her bag at the bar so she went back but Jude noticed how tired his mother was. He told his mom to just watch over Hannah and he’ll go get the bag. When he was already inside the bar, it was dark. As soon as he turned on the lights, a dark figure stood from the corner and blurted out, “Demigod!” Jude thought it was ordering a drink so he replied, “Sorry ma'am but we’re already closed.” Then it came closer hissing, “Demigod! Hungry! AAAHH!” It charged spreading its wings so it appeared bigger and when the lights brightened up its face, Jude saw it looked some sort of chicken woman. It was a harpy. Jude ran for life as it trashed the whole place trying to get him but little did they both know that another man was there and he seemed drunk. “EY! KEEP IT DOWN, WILL YA!?” the man shouted in a drunk voice as he tried to help himself stand up from lying down the floor. Jude frantically asked help from the man and surprisingly, he knew how to handle the situation. The man grew vines and he seemed to be controlling them with his mind. He also let out powerful blasts of wine and directed it at the harpy. “Hey, kid! Don’t just stand there! Get my dagger!” the man said clearly still drunk. Jude took out the said dagger from the sheath attached to the man’s belt. Just in time, another harpy came breaking the glass windows. The man unsheathed another weapon and this time, a broadsword. “ATTAAAACK!” the man shouted. Together they fought the harpies, slashed and thrust their weapons until they disintegrated. After the battle, the man just fell down the ground and was immediately fast asleep.

Jude did not leave him until he gave an explanation so the next morning, the man told the whole truth to him. He explained that he was a son of Dionysus and the monster was after him since yesterday also the weapons were made of Celestial Bronze, a material especially used to forge weapons against monsters. As for Jude, he was not so sure who his parent was but the man was, indeed, sure that he was a demigod as well, noticing the way the harpy was after him last night. Besides, monsters won't attack him if he was a mortal even a clear sighted one. When the man was about to leave, Jude pleaded him to stay, afraid of any other monster attacks. The man hated cowards on top of everything else and so he decided to train Jude himself. By the way, the man’s name was Tyrone.

As years passed by, Jude became stronger and so did the monsters that attacked him. Tyrone and he would always fight together and along the way he also discovered some of his abilities like being able to summon fire that gave them a hint that perhaps Hephaestus is his father. When he was fourteen, a hellhound came after him when he just got home from school. Tyrone would always be there just on time to help Jude fight the monster. Like what they always did, they wielded their weapons outsmarted the hellhound by quickly going behind it and stab it then it disintegrated. Later that same year, another pair of harpies attacked them. They did the same tactics when they defeated the harpies at the bar when Jude was thirteen.

At the age of fifteen, stymphalian birds came flocking around Jude. Tyrone being experienced in fighting such things, made loud noises to distract them while Jude one by one attacked them. Months later, telekhines attacked them when they were near the beach. Tyrone was quick to disarm them and while he was at it, Jude immediately attacked them then they just disintegrated.

Sixteen--two fire breathing horses attacked them. Thankfully, Jude was resistant to fire so he pretty much got away from it easily with also the help of Tyrone's blasts of wine.

Jude, already seventeen, had been asking Tyrone if there was any place he used to stay, something like a safe haven. Too bad Tyrone was too old to remember. Actually, he was cursed by his own father, Dionysus, to forever be lost in the outside world and never return to Camp Half-Blood making him fight monsters alone all his life rather than having him die in the hands of another god because of infuriating it.

One night, monsters again attacked, this time two chimeras. Good thing Jude already learned his fighting style with the dagger he had been using and a satyr also arrived to help. It took years before the satyr found Jude because of Tyrone's curse. A part of that curse was to never be found by anyone from camp and Jude was also affected, not entirely, since they were together. As they fought, Tyrone became badly injured and Jude, as well. Later, the satyr also weakened. Seeing the situation, Tyrone told the satyr to go on and save Jude. He knew that the satyr was there for the demigod. He knew that was Jude's only hope. Tyrone gave his broadsword to Jude, knowing he'd need it, before saying goodbye but Jude didn’t want to leave, not with the old man fighting alone. Since he was so stubborn, Tyrone made him feel drunk which made it easy for the satyr to carry him along. Tyrone used all of his strength left to slow the chimeras down while the satyr, along with Jude, ran for their lives. They rode a cab going to CHB and finally, they arrived safely. 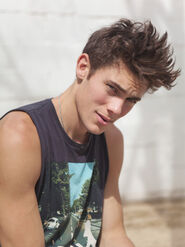 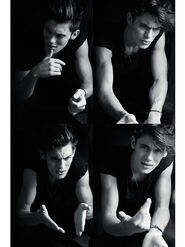 The Many Faces of Jude 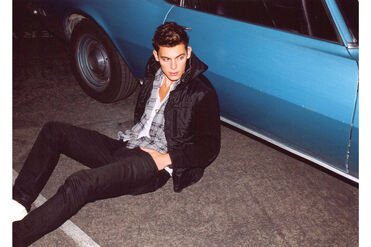 Retrieved from "https://camphalfbloodroleplay.fandom.com/wiki/Archived:Jude_Walker?oldid=1748596"
Community content is available under CC-BY-SA unless otherwise noted.