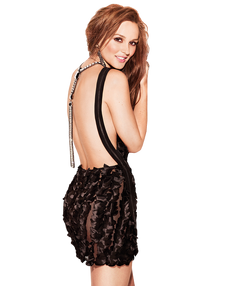 She is very ambitious and rebellious. She is also a major, major, flirt, even though she really shouldn't be flirting in the first place. She also hangs on to old habits for a while, such as being a big flirt and being a player.

Vanna Nicole was a small street magician with big ambitions in the early 1940s. These ambitions caught the eye of Phlegethon, who fell in love with her. They dated for a couple weeks, and then he left Vanna.

Vanna was distraught and confused when she found out that she was pregnant. 9 months later, she gave birth to a little baby with a big face and angelic eyes. In the middle of the night, Phlegethon snuck into Vanna's house and left a note.

Dearest Vanna, I know that I left you and that you don't know why, but that is beyond the control of you or me. You now have a child, our child. Please take good care of her, and you will probably never see me again. Love, Phlegethon, God of Fire.

Vanna's little girl grew up just like her mother, a small fish in a big pond with gigantic ambitions. She had a particular liking for fire, and she liked to believe that she had a godly control over fire. She believed that one day, all mortals would bow down to her and respect her and that she would have innate control over fire. Everyday when she got home from school, she would play with matches in the kitchen, and her mother didn't seem to mind. When she was 11, her powers of fire grew immensely powerful, and she began to believe that all mortals, because they did not have this power, were under her. She began to think that she would conquer them all. Mortals were like scum to her, weak, wimpy, and dependent.

One day, when she was 12, she was attacked by a hellhound on her way home from school. She screamed for help and weaved through the crowds, dashing to get away. The monster was faster, and right when she was about to be killed, a trained demigod stepped in to kill the monster.

His name was Dominick, and he was from camp. He trained her, his hope being that when she was all ready to go, she would agree to go. But, right after he presented her with a small CB axe and an invitation to camp, little Katarina decided that she didnt need any more help and slammed the axe into Dominick's head, killing him. Shocked at what she had done, she ran home to her loving mother.

With her new weapon and training. Katarina was okay at home. But, she was at the age where her powers started to kick in more. For the next few years, Katarina honed her powers and exercised her skills more and more everyday, hoping to become a spectacle out on the streets. She encountered hellhounds and harpies and the likes, killing them the way that Dominick showed her.

When she was 20, she finally decided to preform. She gathered up the whole neighborhood and proclaimed that her powers over fire were more powerful than a gods, and that all should worship her. Then, she began to preform, her control over fire awing the crowd. She began to humiliate Hephaestus, making fun of him and even burning a picture of him to the ground, saying that she was much better and stronger.

Up on Olympus, Phlegethon was proud of his ambitious daughter, thinking that she didn't actually think that she was a god or that any of the moves to humiliate Hephaestus were serious. Meanwhile, Hephaestus thought the exact opposite. So, as Katarina conjured up fireballs, he sent one of them to hit her and turn her into ashes, thinking that the threat and his humiliation were over, even if it wasn't really even a threat.

Phlegethon was distraught. He turned his daughter into a fire nymph and hid her away for 48 years, after that time period thinking that Hephaestus had forgotten. He sent her back to the mortal world. But, Hephaestus heard Phlegethon bragging about it, and got worried that the humiliation would start again, this time worse. So, he decided to show what a fool she was by making it that anything she loved would burn, so that she would realize to never humiliate the gods again.

When she arrived on Earth, she met a mortal boy who ran away from home and joined him. Slowly, over the course of 2 years, her trust in him slowly developed, eventually turning into love. Without knowing that she was cursed, she kissed him and he burned to ashes right in front of her eyes.

Suddenly, her desire to rule the mortals came back. They were weak, too weak, and the gods no longer deserved to be in power. She burst into a fit of screaming rage, and after a child from the BC heard her screaming and found her, asking her what her story was. She told him and he decided that she would be good to have as a member, whisking her away to the Sanctuary.

Her Life at the Sanctuary

Find her a new boyfriend, a demigod, who burns.

Maybe have her return to Atlantic City to find that her mom burned the second that she was cursed, though she already was about to die >.<

RP her a bit with children of Heaphaestus

How She Relates to Others
Relationships
Favourite Quotes & Misc

Retrieved from "https://camphalfbloodroleplay.fandom.com/wiki/Archived:Katarina_Nicole?oldid=1552058"
Community content is available under CC-BY-SA unless otherwise noted.