Child of Tartarus ~ Member of Liberi
(Owned by: Kane) 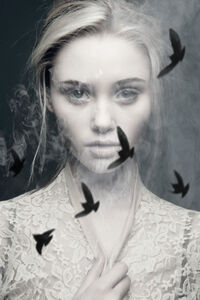 Polar opposite from her twin brother, Kaeden. Kaydenza is a flirt and loves hanging out/flirting with hot guys. She is very cheerful and loves to be around her friends. She, like an Eros/Aphrodite child loves fashion and has a thing for accesoring. She dearly loves her brother but hates it when he's so protective.

Though recently her inner Tartarus kicked in and Kaydenza feels like the opposite of her bubblegum chewing personality. Kaydenza feels the need to dress all black and negative, feeling the need to murder others. Recently, she and Dante Moretti murdered two campers; Carina Valentine, Callista and Saphronia.

Parents meeting: Tiana Black was a photographer who liked taking pictures of the night sky. Tartarus was roaming around the mortal world while possessing a man. He saw Tiana and was immediately mesmerized by her beauty. Under the name Dale, he took her out to a bar and they both got really drunk. Tartarus and Tiana made passionate love. But the next day, he left her. Tiana never forgotten Dale. The next week, she found out she was pregnant with two children, and in a few months time gave birth to twins named Kaeden and Kaydenza. Some time after, Tartarus visited Tiana's home and left on her door step an earring cuff (Kaeden's) and a bracelet (Kaydenza's). On their 13 birthday, they received the cuff and bracelet.

Kaeden: Kaeden shut everybody (even his mother) from him. He was really antisocial and only went out to do really important things. He wasn't very popular and only talked to his sister and mother. He was also bullied a lot too and got lots of bruises and scars. On his spare time, he practiced archery and took pictures of nature (rarely people).

Kaydenza: Kaydenza was the popular girl, she lived spending time with her mother taking exciting photos of nature. She had lots of friends and is never alone.

The twins then later got diagnosed with ADHD and Dyslexia.

First monster attack: Kaeden and Kaydenza were both walking home. Two hellhounds attacked them. Kaeden's earring cuff came off and it turned into a bow and some arrows came with it. On instinct, Kaeden shot arrows at them, shielding Kaydenza at the same time. After a couple of minutes, he finally disintegrated them both. He mostly got scratches while Kaydenza got from the scene with no scratches or bruises. They both pretended like that never happened.

Monster attack aftermath: Kaeden and Kaydenza lived life as if the monster attack never happened to them. But at age 14, a harpy attacked them. Luckily, Kaeden saved the day using his archery skills. At age 15, Kaeden had a Myrmekes attack him. He barely made it out alive. Some time after Kaeden's Myrmekes attack, Kaydenza had a hellhound attack her. Her bracelet came off when it got swiped away from her neck by the hellhound and that's when she found out it can turn into a celestial bronze sword. She used the sword to disintegrate the hellhound. She too barely made it out alive. At age 16, they had a Minotaur attack them this time. A satyr came to their aid and with their help, they disintegrated the monster. The satyr then told them of their origins and their background. Not believing it and not wanting to do anything with it, Kaeden and Kaydenza didn't go with him to camp. But once they found out that they will need to the training and help, they reluctantly accepted to go. Kaeden told Tiana that he was going to an archery camp while Kaydenza told her that she wanted to go over seas to study. Seeing that they are dependent now, Tiana let them go. Once they got to camp, Kaeden and Kaydence learned all about the Broken Covenant which interested them. Kaeden and Kaydenza were then claimed by Tartarus which then made everybody think twice about the two. Seeing that they are not wanted, Kaeden and Kaydenza ran away from camp and looked for the BC. (They asked several demigods where the BC might be) It took them several days to find out the location but once they did, they knew which faction they wanted to go for. (different factions for the both of them) 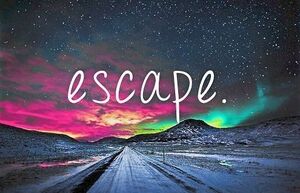 She just came to camp...

Have her go on a mission...

How She Relates to Others
Relationships

Retrieved from "https://camphalfbloodroleplay.fandom.com/wiki/Archived:Kaydenza_Black?oldid=1568516"
Community content is available under CC-BY-SA unless otherwise noted.