Drum Sticks that turn into a Double Headed Spear

NOTE: He shares a body with his twin so he has a split personality. At some points he ha control of his body, sometimes Tim, his twin, has control of the body, and sometimes they both have half control.

When Kendall has control: He is a good boy. He is honest, isnt mean, dosent bully, cherry, friendly, and brave. He is still a small flirt. He is an ex-christian. He shares his body with his twins, Tim, spirit. He didnt want to admit it before camp but he is bisexual. He is a excellent drummer. He is not frightened of death.

When Tim has control: He is a complete bad boy. He rarely tells the truth. He is very cocky and mean. He is a major flirt and loves girls and boys. He is bisexual. Unlike his family he he didnt believe in god. His spirit is within his brothers body. He has a morbid personality. He is not frightened of death.

Sometimes they have equal control and the personalities mix.

Kyleigh met Thanatos in college. He told her that his name was Albert Jameson. She fell in love with him but since she was christian she wouldnt have pre marriage sex. So Albert(Thanatos) forced her upon him and left her. She told the police and they tried to find him but failed. She was pregnant with twins and 9 months later gave birth to Kendall and Timothy. She he heart to give them up for adoption, so she kept them. She finished school and married David Long. She asked him to act like the twins real father and not to tell them about Albert(Thanatos). Kendall and Tim never knew about their real father and grew up like normal christian boys. They went to church every sunday and Kendall made good grades, but Tim didnt. He was going down the wrong road according to his family. When Tim was 13 he stopped going to church and said that God was bogus. He started to date lots of girls and eventually lost his virginity. Tim eventuall got bored of girls and moved on to boys. Kendall however never dated and always beleived in god. He also was bisexual, but wouldn't admit it. When they were 16 Tim dated Susan House, a daughter of Melinoe but they didnt know that. They dated for a couple months when Susan started to cheat on him. Tim got made and killed Susan out of anger. Melinoe was not happy with this and cursed Tim to live in his brothers body. So Tim's body fell to the floor. Kendall started to feel very wierd. He then heard Tim's voice in his head saying "What the h*ll?" They soon learned that they shared a body but didnt know how. Kendall didnt want to tell his parents, who thought Tim was dead, because he didnt want to seem crazy.

So he lived like that for a year, at the age 16, when he was attacked by a hellhound. The beast killed his family and was getting ready to kill him when it was killed by a golden arrow and it turned to dust. A goat man came out of the shadows and explained what was going on and took him to camp. When Kendall got to camp he was claimed by Thanatos. He also learned that God wasnt real, only greek gods were. Later that night Kendall was visited by Melinoe and she told them that she was the one that cursed Tim to live in his body for killing her daughter Susan. Kendall is now trying to adapt with Tim in his head. 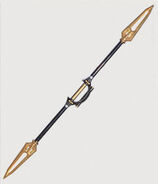 Kens's Drumsticks that turn into his weapon.
Add a photo to this gallery

Retrieved from "https://camphalfbloodroleplay.fandom.com/wiki/Archived:Kendall_Long?oldid=1661074"
Community content is available under CC-BY-SA unless otherwise noted.