Head Priest of The Bethel

Staff with Blade That Comes Out

Ry is one of the more relaxed priests. He loves to play around and have fun. Its hard for him to be serious, but when he needs to be he can. He worships the gods, and has an attachment to them all, especially Apollo. He is impassioned and compassionate. He loves to be the center of attention, and when he has everyone's attention, he seems to inspire people, and helps them be themselves. He loves to help people in any way he can, and will not be a nully or tolerate nullies.

Pancrea, goddess of cures, fell in love with Apollo while she was serving him. What she didn't know was that Apollo had also taken interest in her. After several years, Apollo finally confessed to her that he loved her and she confessed to him. They both were extremely happy, and the two gods had a fling. The end result was a healing spirit named Khryses. Khryses was born on Olympus, but Pancrea then took him away from Olympus and the two went to Greece where they lived in the deep forest.

Khryses grew up serving his mom and helping her with all her healing needs. He would go out and find all the herbs his mother needed to make new cures for diseases, and he would also give the cures to nymphs, satyrs, animals, or mortals that needed them. Khryses, who eventually went by Ry, did not want to be with his mom. He did not want to be her errand runner. He hated the fact that he was a healing nymph. He wanted to be with his dad and help him. Ry eventually ran from Pancrea. He spent many months heading for Mt. Olympus. When he finally arrived, his father welcomed him with open arms.

Ry explained to his father about how he hated that he was a healing nymph. Apollo told him that he could not change the fact that he was a healing nymph, but he could train Ry to become the Priest of Apollo, which would make him the Head Priest, at Camp Half-Blood. Ry was so excited about this offer, so Ry accepted. Ry spent many years training and learning the ways of a priest, but before he could finish, Deucalion Elias had taken the position already. Ry was deeply saddened by this and complained to his father about it. Apollo told his son that Deucalion was already trained and he was better for the position. Ry was not happy with his father so he ran from him as well.

Ry started to live in Greece as a normal citizen. He lived there till Ancient Greece fell. Ry fled the city and lived in the forest with other Greek nymphs. After several hundred of years, Ry moved to America along with Olympus and Camp Half-Blood. Like the other nymphs he lived at Camp, and stayed there for the rest of his life. Recently, Deucalion left camp, and Apollo called upon Ry to take the position of Head Priest and Priest of Apollo. Ry accepted gladly and he moved into the Bethel. 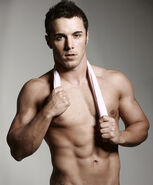 As a Healing Spirit

Retrieved from "https://camphalfbloodroleplay.fandom.com/wiki/Archived:Khryses?oldid=1661702"
Community content is available under CC-BY-SA unless otherwise noted.