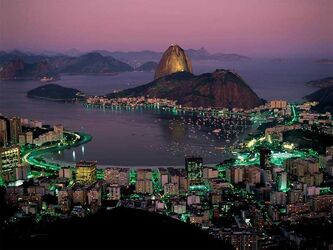 Eliminate the Tajeros twins and their criminal empire. Find Andressa Fagundes, if she is still alive.

How you travel to places is not important, bickering for post after post after post whether or not to take a taxi or an airplane is just going to slow you down and keep you from the good parts.

Also, in order to receive prizes for this mission when this all ends, this mission must come to a satisfactory ending place, that doesn't mean they necessarily "have" to be back at camp, but it should be at a place that Flame and myself feel that it mostly finished, if not all the way. If you must go inactive at any point please let someone know and if possible get someone to post for you. Leaving it up to your teammates to do all the work will be noticed, and if this happens, we reserve the right to hold back prizes from team members who did not seem to hold up their weight in the mission, and were active everywhere else on the wiki.

​They arrive to the taxi by the road and all climb in Astrid directs the driver to the air port.

They arrive at the airport

There are no suspicious signs at this random shop.

They board the plane and it takes off and lands smoothly. They arrive in rio safe.

They get in the taxi which drives them to the nearest hotel.

They all take the elevator upstairs and make their way to their rooms until they notice someone standing at the other end of the hallway.

The man is watching them out of the corner of his eye, and seems totally unaware of the cloaked person near him. He seems to make up his mind and makes his way towards them at a casual pace, adjusting the tie on his expensive suit as he does so.

The man continues at a steady pace and, as he passes them, says quietly:

He moves past them and continues down the hall; opening a door at its other end and proceeding through, and leaving it slightly open behind him.

As Astrid steps into the entrance way, everything changes. The walls and ceiling of the hallway melt away; replaced by thick jungle and sheer cliffs. Somehow, they appear to be on a tall hill overlooking the city; far away from its center, but positioned so as to give a wide view of the sprawling Favelas against the cliffs. On all other sides, the jungle looms; broken only momentarily by the ruins of an old 16th century chapel around which a temporary encampment seems to have been set. Radio equipment, weapons, and crates containing unknown items are stacked around, many seating unkempt looking men and women staring at the group. A table sits out near the cliff edge against which the suited man leans, a scantily clad woman next to him, and across which papers are scattered. These and the jungle leaves, rustled by the sea breeze, are the only things moving and silence otherwise permeates the camp; its occupants either waiting for some discrete move, or waiting for one from the group.

The men and women around them tense up, preparing for an attack, but the suited man and his companion seem entirely unaffected; continuing to look on with what now might be considered wry amusement.

After a significant pause, the suited man speaks, still leaning against the table.

He points to a medium sized prison outside the city.

With that, the environment around them melts away, replaced again by the hallway they had seemingly left, and the empty room through the door.

Retrieved from "https://camphalfbloodroleplay.fandom.com/wiki/Archived:Lilith%27s_Letter_Phase_Three/Camp_Team_Four_-_Rio?oldid=1039030"
Community content is available under CC-BY-SA unless otherwise noted.