Objective: Information regarding a possible agent of Pagos has been uncovered, suggesting that he has employed an individual using blood-based powers. Intel was discovered near Germany's Black Forest. 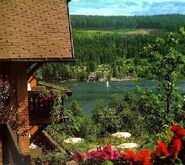 The cab arrives and takes them to the Manhattan Terminal.

They arrive in Germany and take a cab to Blackforest.

They find a small mouse, hiding beneath the leaves. As they do, they hear a much louder noise further into the forest; like the sound of breaking sticks and branches.

The three follow the sound, until they hear it again.

A low growl emanates from the bushes to their left.

As Lucinda approaches the bushes, another growl, louder this time, can be heard from behind them.

A group of four wolves spring from the bushes, one from the location of the original growling noise, another from the second, and another two appear to the groups' left. Their eyes glow an odd red, and each leaps at a member of the group with its fangs bared.

Lucinda's blade cuts deep into the shoulder of one of the wolves, knocking it to the ground from where it tries to pull itself away. Kamilla grazes another, causing it to back up and re-assess its attack. The two remaining wolves attack while the others are recovering.

The wolves leap about wildly, making themselves hard to hit, but Lucinda's blade strikes cleanly through the neck of the one lying on the ground and kills it instantly. Kamilla's blade strikes another, badly wounding it, but not outright killing it.

Both of their attacks strike home, killing another two wolves, while the last runs off into the forest.

Nothing of note appears along their path.

They eventually come across a trail created by the blood from the final fleeing wolf.

The trail leads to a small clearing, occupied by the wounded wolf and two others that appear to be licking its wounds. Their eyes no longer appear red.

The two wolves at its side turn to face her and growl, but do not attack.

The growling gets louder.

Something moves in the bushes to their left, and the wolves' eyes begin to glow red again.

An odd man emerges from the bushes, a wolfish grin marring his features and his eyes glowing red. He appears to be wearing part of a stuffed Wolf head as a hat, his face is covered by several decorative tattoos, and his tattered clothing may well be of traditional Japanese origin.

His wolfish grin grows wider, and he continues to stare.

Retrieved from "https://camphalfbloodroleplay.fandom.com/wiki/Archived:Lilith%27s_Letter_Phase_Two/Camp_Team_Four?oldid=1218714"
Community content is available under CC-BY-SA unless otherwise noted.