Ok, it'll be really hard for flame and I to help move this along, if you lot aren't even in the same place with your rp's. LCT has his character start out in some no-named airport like he just got off a plane by himself. Sean is acting like they are only just meeting up. If they did land in the airport, odds are its Rio, as it's a major city, but Lott is talking about going to Rio. And what office exactly did Ob have his character randomly walk out of?

Objective: This team began, but never finished, supporting Andressa Fagundes' attempts to stop the Tajeros family from conquering Rio's criminal underworld. Now that it is firmly within their grasp, it would be within the interests of any team returning to this location to contact her and take back the city; denying Pagos valuable resources. The BC team that went here uncovered only some information regarding the status of the many gangs present in Rio, this information could be useful for whoever undertakes the other mission in Rio. 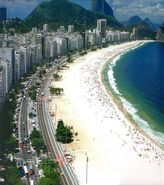 Andre: Steps out of the airport security and customs line, having just had all of his items inspected, and takes a deep breath. He looks around, knowing he might be getting watched already, but tries to stay calm and just act like a tourist or maybe an exchange student. He looks around for any faces he might know or any symbols he might recognize that would identify who he is suppossed to meet up with.

Alec: He walks out behind him and laughs Jesus dude, you look like you're about to jump outta your skin

Lyle: is sitting on a bench reading a book where are the other members? looks around

Andre: Jumps a little as Alec walks up behind him. Holy crap, man! Don't do that. I am about ready to jump outta my skin. At least until I know what the whole story is about what's going on here.

Asher: Walks out of an office, extremely annoyed Damn guards trying to feel me up for freakin weapons my ass...Looks at the others So i'm guessing by nervous boy's face you guys are the others?

Lyle: comes up behind him. I could ask you the same thing.

Alec:Yea, I guess. He's just a bit testy, though.

Andre: So, is this the whole team then? Or are we waiting on anyone else?

Lyle: i think this is everyone. Let's go.

Asher: Looks at Alec with a wtf face* ...And now we know who the childish one is in this team....

Alec: Frankly, go f*ck yourself. You don't know shit about me

Asher: Maybe, but my cousin has told me a bit about you. You did date Flori, didn't you?

Alec: Laughs She especially doesn't know shit about me.

Lyle: walks away. you fools coming or what?

Asher: shrugs Fine, she doesn't know you. Now let's get going, we don't have all the time in the world.

Alec: He knees Asher in the gut as he goes by

Andre: Dude! Save it for bad guys! We need to work together if this is gonna go smoothly. Looks at Asher You ok?

Asher: Holds his gut for a minute before breathing deeply and moving again I'm fine. Now lets get this freakin mission done with. The sooner the better.

Lyle: Should I summon the grey sisters or should we take a cab?

Alec: Perhaps.....He hails an oncoming cab and steps in.

Asher: Enters the cab as well, sitting as far away from Alec as possible.

Alec: He says to the driver To Maracana, my good man.

Lyle: and step on it!

Andre: So was anyone here part of the group that looked into this place earlier? If so, it would be nice to know what we are up against.

Asher: My friend Raphiel was part of the original group. They didn't get far though...and that was against one gang. It's going to be a freakin battle against all these other gangs.

Andre: Hmm...what about that name. You know the person we are supposed to help? Should we ask the driver or anyone else about her? Or would that be calling too much attention to ourselves?

Asher: I have a feeling that she'll find us...

Andre: Crap, I was afraid of that. Did your friend at least tell you what gang symbols to watch for, so we know if someone is trying to play us?

The cab arrives and the team gets out after paying the driver.

Andre: Stretches. Well, no more time to worry about that, I guess. Let's see who is here to greet us. Looks around his surroundings for any suspicious looking or armed people. Also looks for possible defensive positions and escape routes from here.

Alec: He pulls out his ukelele and begins to play absentmindedly See anything?

Nothing is immediately obvious.

Andre: Nothing. This place seems pretty peaceful for the moment. Goes to see if there are any newspapers for sale in English or French.

A few newspapers can be found in English, but none in French.

Andre: Buys an English newspaper to see if there are any clues about gang hotspots or other useful information.

Asher: Points at the article that talks about the violence erupting We should head there. The only gangs that would be fighting are the ones under Pagos' control and the one we need to find.

Andre: I agree. It's the best lead we have right now. Let's go check it out.

They take a bus to a stop close to the location where the violence erupted as stated in the paper.

Asher: So...where was the violence exactly Andre? What corner?

Andre: Checks the newspaper again. Based on the photos in the article, we are pretty much at ground zero right now. Look, you can see that corner there in this one and that plaza down the street in this other one. Shows the photos to the rest of the group.

The street they are standing in appears identical to the one in the picture, though here the street seems somewhat deserted.

Alec: Like "We're about to get our asses kicked" not right?

Lyle: maybe. I just have a weird feeling that we are not alone.

Momentarliy, slight reflection can be seen in one of the empty windows, like light glinting off of a metallic or glass object.

Lyle: what was that? You guys want to check it out?

Retrieved from "https://camphalfbloodroleplay.fandom.com/wiki/Archived:Lilith%27s_Letter_Phase_Two/Camp_Team_Two?oldid=1218712"
Community content is available under CC-BY-SA unless otherwise noted.