Objective: It is believed that Pagos has hired a group of demigod mercenaries based out of Stuttgart, Germany. Their abilities and nature are unknown at this time though are rumored to number around two dozen. Reports of their handiwork include several strange wounds throughout the bodies of several demigods and mortals alike in the area. 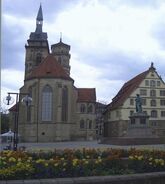 The plane lands in Germany

The crime scene is located in an aging German house, clearly constructed towards the end of the German Empire's heyday in the 1800s. The building could hardly be called a mansion, but its builders were clearly moderately wealthy and it shows. Although the house appears to have been maintained and is by no means a ruin, it also lacks telltale signs of being lived in.

The house is dusty and filled with cobwebs, and quite contrary to the exterior of the house it appears to have been neglected entirely. The furniture most likely dates from the 20s or 30s and shows signs of extreme aging. The only signs of recent disturbance are located in the kitchen where numerous footsteps have kicked away most of the dust and a clear outline of a body has been drawn in chalk. Despite these signs of activity, the house seems deserted.

They find nothing of note.

As they exit the house through the back door, Marina accidentally kicks something across the floor. It appears to be a small vial, containing a few drops of deep black blood.

Another can be found in the corner, but its contents are entirely drained.

No more vials are visible in the surrounding area, though her searches uncover a hidden trap-door in the floor.

The space below is surprisingly small, with room for only two or three people to stand next to eachother. This space is filled by a small workbench pushed to one side of the room and a sack in the corner of the other. On top of the bench, a row of additional vials can be seen along with a folded note.

The vials are empty, though the note reads as follows:

"Leon is on to you, get to the Altes Schloss. Destroy what you cannot bring!

The sack is full of yet more vials, and a small case labled "syringes".

Retrieved from "https://camphalfbloodroleplay.fandom.com/wiki/Archived:Lilith%27s_Letter_Phase_Two/Crossover_Team_Four?oldid=1218709"
Community content is available under CC-BY-SA unless otherwise noted.