These characters are considered "special characters" and may, given that the right decisions are made, become available as usable characters in Camp or the Broken Covenant after the Lilith's Letter Campaign is complete. This page will be updated each time one is discovered, or whenever information about any one of them is found by any team.

Pagos is at the head of this list, though is not collectable. 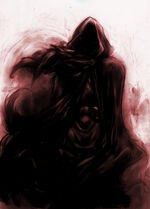 Born of night and bound in ice,

blood as his saviour and sacrifice,

two lingering lights among the bones of the dead,

cloaked in shadow, crowned in white, 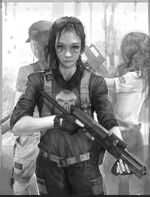 Discovered in Guangzhou by Camp Team 5.

Sayuri Soto, daughter of Takahiro Soto, watched monsters brutally kill her parents and siblings at only twelve years old. Gifted with The Sight, possessed by the desire to deliver justice, and armed by her family fortune, Sayuri and her team of like minded individuals poses a significant threat to any who may get in their way. Sayuri may have a hard time differentiating between Monsters and Demigods as both have had a negative impact on her life. Thus, she puts them all in the same category; targets to be eliminated. 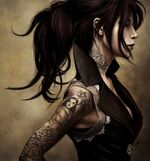 Second in Command of the "Twisted Serpents" gang in the city of Rio, and most of Andressa's views and goals are currently unknown. However, her gang is all that stands between the rising Tajeros Crime Syndicate, and total control of Rio. She appears to be a child of Aphrodite. 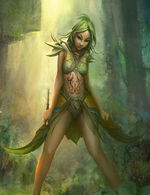 Discovered near Sydney by BC Team 3 Phase One

Very little is known about Tamarisk at this time, though it appears that she knew Lilith in the past and that Lilith saved her life at one point. She claims that she owes Lilith for this, even though she has remained trapped within Wollemi National Park for nearly 300 years and is naturally curious about the outside world. Recently she unknowingly bound herself to Pagos through an attempt to free herself, and although she gained this freedom she is now effectively a slave of another kind. Her current status is unwilling, but she is hardly ready to commit suicide to deny Pagos her aid. 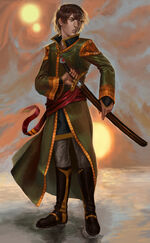 Discovered in Cairo by Camp Team 3

Fadel seems to be a circus performer, and although he has displayed no exclusively demigod related powers so far, his unbelievable skill with a sword hints strongly in this direction. The Egyptian seems keen to show off his abilities, and not unfriendly, but he was also quick to dismiss the team once his performance was finished. He covertly gave them a note that may suggest he is interested in engaging in future contact.

Retrieved from "https://camphalfbloodroleplay.fandom.com/wiki/Archived:Lilith%27s_Letter_Special_Characters?oldid=1039215"
Community content is available under CC-BY-SA unless otherwise noted.