Louis is can be immature at times, and this does get him in trouble. He likes to be adventurous, and is very curious. He likes to take leadership, and doesn't like being told what to do. He is very loyal, and is caring and loving towards his friends. He can be genuine at times, but he likes to goof off. He likes to look his best, and loves to go shopping for new cloths. He is very insecure about himself. He also can give amazing advice to people that need it from him. What people find so amazing about him is that he can be the Louis you need him to be. If you are upset he is the Louis that cheers you up, if you are goofy he will be goofy too, and if you need him to be brave he will step up and be brave. His favorite food is carrots, and his favorite color is red. Louis is bisexual.

Artemis' sacred plant is the Amaranth Flower. She loved the beauty of the flower and planted them everywhere she could, each one sprouting a new flower nymph. Artemis wanted her cabin in camp to also have one of the flowers, so she planted one right in front of the cabin. Artemis expected an nymph to come from it, but it turns out a spirit came from the flower. Artemis has been known to hate men, so she was not very happy with this spirit that had just sprouted from her flower, but she left the issue alone. The flower spirit had no name, so another camper named him Louis. After many years, Artemis coped with the idea of the spirit, and so did the Hunters, and both the goddess and the hunters developed friendships with him. He has lived at camp his whole life and has never left the place, and does not plan on leaving. 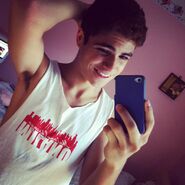 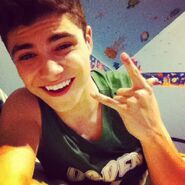 Louis' Bow
Add a photo to this gallery

Retrieved from "https://camphalfbloodroleplay.fandom.com/wiki/Archived:Louis?oldid=1661550"
Community content is available under CC-BY-SA unless otherwise noted.