This character belongs to Avingnon

Bossy in the BC

A Ring That Turns Into A Sword

Her personality is hard to explain. She's a complicated person. She loves drawing, when she's not busy that is, and has a whole sketch book of them. She pretends she doesn't though as she doesn't want to be teased for her 'mountains' and 'farmland' drawings. She's a bit of a "thot" or a hoe. She loves thinking boys as boy toys and is not scared to cheat. She loves movies, the beach, and Madonna, the person she was named after (duh.). She could sometimes be a primadonna. She's a bit seductive yet bossy.

Please note this satyr had tons of practice in >.> sword fighting."

History: Armani Klein worked as a stylist for famous stars. He then met this (Aphrodite) new girl who he had to style. He found out her name was Elizabeth Centric. They instantly fell in love. Soon, he tried to take days off working as they always wanted to be together. As they spent time together for months, they finally did it. She then soon found out she had a baby 2 weeks later, but she didn't tell him until she said she had to go on a trip to Paris. She left and as soon as she left 1 hour later he got a note and found a baby on the doorstep. The letter said:

I'm sorry to tell you I had to go to Mount Olympus. Read some greek mythology to understand. Anyways, this is our child, our real baby. Except she is a demigod. She is in danger of monsters. I know you took a few sword lessons so try to fight for her. Be careful. Sooner or later some person will come at your doorstep with her and tell her he needs to take her to camp half-blood. There will be a cabin for her and all her half siblings. Let him take her because it will be to safety. I'm sorry if your mad at me that I led you to this pain. Anyways, enclosed is a ring that could turn into a sword when you click the the M's Pearl. Don't tell her about it until she is older.

He saw the baby and felt love for it as he felt for Elizabeth (Aphrodite). Of course at some point he felt a bit sad Elizabeth (Aphrodite) left him, he kind if got mad. I mean, she was kind of a player for having CABIN at this camp half blood. He soon named her Madonna, because he was a fan of her first, 2nd she was one of his first famous person he had to style.

Madonna grew up as someone who got what she wanted from the age of when she could speak. She took bow and arrow and sword fighting classes at Lake Bow-row when she was about 10, and met friends like Diana Renee. She had a wonderful life. She was the gossip girl at school and no one stopped her from doing what she wanted to do. She had tons of friends and was the most popular girl in school. She was always bribing the teachers and hated homework. She had tons of sleepovers, and parties especially at 11. She always wore the best clothes at school too. She hated gym and was one of the only girls that didn't try and steal their parents money, she got it from just pouting. She had a lot of boyfriends and loved watching black and white movies.

One day at 12, she saw a shadow of a cyclops. She could have sworn she saw a weird thing, but shrugged.

Madonna was then met her monster at age 13. She was in the girls locker room after gym and a long time of sweating (eww) and she was getting her clothes on. Then she saw the Harpy. She gasped and was so freaked out she also tried to run. Then, a random boy came in a attacked it for her by using reed pipes to wrap it up in a vine. She gasped. She first stared at him, and then said "What boy goes into the girls locker room? If your trying to see something of ours, go make out with someone or something" and then she walked out like nothing happened. Even though she was pretty much freaking out in her head. She then ran out when the guy was about to say something or get her.

At age 14, she was at a empty "about to close down" boutique to get a pink dress with golden roses. She then saw a lady with bronze legs. She yelped. The lady tried to kill her but then the same guy came out of a dressing room and attacked it by using his sword and trash can. Once he flipped, he dunked the trash can on it's head. Then when it wasn't looking her slid his legs under it and as it fell he killed it. "Are you stalking me? omg, whats going on?", she said. He told then told her about camp half blood. Since she didn't believe him she ignored him and told him, to get a freaking life. He then explained, "My Name is Nick, your a demigod, do we have to go through this EVERY TIME?" She cried and then said, "I don't want to leave my father you, you faggot!" She ran away crying from the stalker.

She then went on with her life, trying to pretend it was normal, as it wasn't. She went to school, wandered around the hallways and stuff

When she was 15, she was walking around looking for thrift shops to add on her blog. In a few months was her birthday and she was excited to decorate it with different reviews. All of a sudden, she was attacked by the empousa. But then, the same guy kicked the empousa with swift slash kick. She fell and started bleeding HARD on her elbow. The guy then got out his sword and flew it right in it's body, stabbing it. She was so happy yet so freaked out. He then put something over her and it was dark. And as the dark thing went over her, she heard him mutter, "Finally, I never thought a spoiled girl with 10 inch heels would run so fast."

She probably was knocked out for a day because when she woke up, she was home. She saw the same guy and yelped, "STALKER!" He told her calmly she was a half-blood and her dad knew. He also told her that his name was Nick. He took off his pants to show he was a satyr. She then slowly comprehended this and says, "So You a-aren't ly-ly-ly-lying?" Surprisingly, she didn't freak out as she saw many weird things that day. But she still yelled out annoyed, "Screw you and the Gods, I don't want to go to a fake imaginary camp." He also told her, that if she calmed down, they would be there faster. Her dad kept telling her to calm down and go to camp with Nick. She was so freaked, she fainted again.

She woke up a few hours later. It was twelve o'clock. She then said to Nick after re-assured she was a demigod and this was not a trick that she was ready. They then started their journey on the way to camp.

She was near the strawberry farm. They were making good progress. She got up and started walking with Nick in silence.

She was about to go through the camp door, after Nick told her about it but then a harpy came. She then looked at it and said, "Oh God, No f*cking way." But, something happened. The harpy kind of stared at her like he was her crush. She then slowly walked through the camp doors, while she was confronted by the camp director, "Alexander". He told her if she could do that, she was probably the daughter of Aphrodite or Eros. She then said, Her father fell in love with a women. All of a sudden, a beautiful dove animation showed up on her head, and she was claimed by her mother.

While she was at camp, she was in the deep forest. She then saw the santucary. A girl led her to a place where she saw the Opus group. She then said, "Where do I sign up?", as she was grinning at everyone. She turned 16 after a while staying at camp... 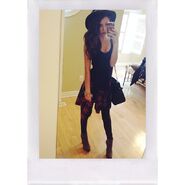 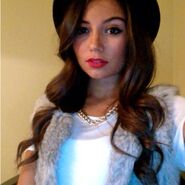 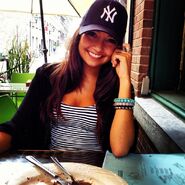 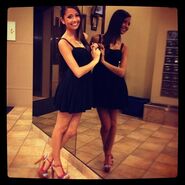 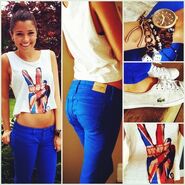 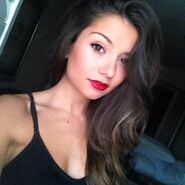 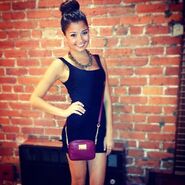 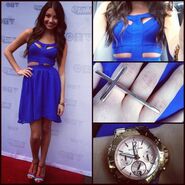 Add a photo to this gallery
Retrieved from "https://camphalfbloodroleplay.fandom.com/wiki/Archived:Madonna_Klein?oldid=1636587"
Community content is available under CC-BY-SA unless otherwise noted.