Makrys is a major flirt. He is bisexual, but leans more towards guys. He is a player and jumps from relationship to relationship. He works out a lot and is very athletic. He is loyal to his friends and is vengeful if anything happens to them. He is humorous and a joy to be around.

Apollo had always had a love for Hemera. One day when he was riding the sun chariot and she was bring the sunlight back. Apollo saw her and started talking to her. She eventually fell in love with him. They eventually started to see each other, and Hemera got pregnant. When Hemera gave birth to Makrys, a light nymph. She sent him to Greece where he would grow up.

Makrys grew up playing with other nymphs. As he grew older many of the nymphs fell in love with him. Makrys would take one every night out in the woods and tell the nymph that he loved her too, to get what he wanted. After many years of doing this and many heartbreaks, Aphrodite was not happy with the nymph. She cursed him. Every woman that he had an affair with, got pregnant, died giving birth, and the baby would grow up to have a strong hatred for his father. Makrys tried to change his ways, but could not resist the temptation. He had more affairs with many nymphs, all died, all had a child, and every child hated him. Makrys could not take it so he turned to men for his pleasure. He averted the curse by doing this.

After many many years Camp Half-Blood moved to America. Makrys was sick of Greece so he had a sea nymph take him to Long Island. He went to camp, and now stays at the Nymph Sanctuary. 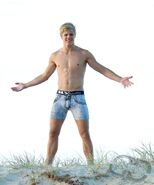 Retrieved from "https://camphalfbloodroleplay.fandom.com/wiki/Archived:Makrys?oldid=1465026"
Community content is available under CC-BY-SA unless otherwise noted.