(This Character Belongs to Nhlott)

Personality
Milo is fun-loving, free spirited, and a rebel. He will never hesitate to stand up for himself and others. He believes in fighting for what is right at all costs

Growing up in Orlando, Milo was truly happy. Though,he would always have to live with his mother’s incessant babbling about his father, which she never spoke about to say more than “he was the best man I’ve ever been with, and no man will EVER compare to him.” Due to her near obsession with Palaemon, Dominique soon had to quit her job as a marine biologist. Growing up lot of people were afraid of Milo due to his always being bigger than other kids, and he’d developed an inferiority complex over the years, and he noticed his Diver's Ed teacher, Dr. Conners would always stare at him funny, almost as if he were hungry. On the last day of his Junior year of high school, Dr. Conners called him from his final exams into his office. He went in, and noticed a rope or something on his shoulder. When he reached to pull it, it turned into an orange tail, revealing that Dr. Conners was a manticore. It began to attack, but a buddy of Milo’s, Donnie, tackled him and yelled “C’mon!!” While running to his house, the manitcore attacked again, but this time, Milo fell into a nearby lake and the monster jumped after him. In fear and rage, Milo'd jaw unhinged and he grew a flurry of teeth and he bit its head off. As he stepped out of the water, he noticed a boxcutter in his pocket. When he extended the blade and it expanded into a sword. Donnie then explained that he was a demigod and that he needed to go to Camp Half-Blood in New York while he took him to the bus station. After a 2 day long bus ride to Long Island, the two made it to camp, Milo being immediately being claimed as he stepped foot inside. 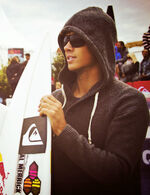 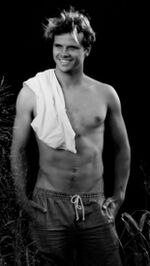 Milo is a 17 year old caucasian male. He is 6'3, 205 lbs. He is muscular, with a slim build, similar to a dancer. He has medium length blonde hair, and piercing green eyes..

He wields a celestial broze sword, Tornami, given to him by his father.

Retrieved from "https://camphalfbloodroleplay.fandom.com/wiki/Archived:Milo_Silas?oldid=1335876"
Community content is available under CC-BY-SA unless otherwise noted.