Min-Hee is a very cheerful and positive person, and she is rarely sad or angry. She is shy towards people she is not familiar with, but once she gets to know them, she is very outgoing. She is very clumsy and sometimes forgets things. She is very friendly and caring to everyone, even to people she doesn't like. She is a peace-loving person, and does not like resolving problems by violence. She is actually good in fighting, but she rarely fights. When She does fight, she tries to end the fight quickly. Min-hee loves eating, especially pastries, but she usually never gains weight.

Choi Seung-Hoon was a peace-loving man. He owned a small bakery in a small town in Ohio, and customers came by several times a day. His bakery had a calm and cozy environment, and he always treated his customers very well. One day, a beautiful but simple woman came to the bakery. Seung-Hoon fell for her immediately. As Seung-Hoon talked to the woman, he found out that her name was Rose. He confessed his love for Rose, and they began their relationship. They spent many days talking in cozy places and enjoying the peace of Seung-Hoon's bakery.

After 6 months, Seung-Hoon found a basket in front of his house. In the basket was a bundle of blankets that was wrapped around a baby, and a letter. The letter was left by Rose, who explained in the letter that she was actually the goddess Harmonia, and that she had to leave him. She wrote that the baby would be a demi-god, and should go to Camp Half-Blood when she started getting attacked by monsters. From then on Seung-Hoon took care of the baby, who he named Min-Hee.

As Min-Hee turned 5 years old, Seung-Hoon decided that he wanted to home-school Min-Hee. While he was teaching her to read, he found out that she was dyslexic. He started to teach her things by reading things out loud and giving her things that she could learn by using her hands. Seung-Hoon bought short audio books for her to listen to, and small blocks she could count with. At age 8, he taught her how to bake simple things. At first, she was very clumsy and made many mistakes, but she quickly became really good and developed a love for baking. Seung-Hoon taught her other school subjects like history and science, and he made Min-Hee do experiments to learn things better. Seung-Hoon started to pay money for Min-Hee's karate lessons so she could protect herself and others if she had to.

When Min-Hee turned 11, Seung-Hoon decided to move to New York, to move to a different environment and to find a better place for his bakery. Min-Hee was very glad that she had friends to talk to. Seung-Hoon opened a better bakery that more customers came and enjoyed his goods. There were not many kids in Min-Hee's neighborhood, so Min-Hee was disappointed. She continued to be homeschooled, and she wished that she had a friend she could be with.

At the age of 13, Min-Hee and Seung-Hun went camping. The campsite was full with a lot of people, and Min-Hee was excited as she saw some people of her age. As she was about to approach a group of girls, their parents called them into their tent. Min-Hee was disappointed but saw a boy a that looked a little bit older than her. The boy noticed Min-Hee walking toward him and smiled slightly at her. He introduced himself as Max, and held out his hand. Min-Hee shook his hand and asked him if he wanted to explore the woods. He slightly frowned, but accepted her offer.

Max and Min-Hee explored the woods, but could not find anything. They were walking back to the campsite when a large wolf-like creature appeared. Max and Min-Hee moved back, and Min-Hee worriedly watched Max and the creature. Min-Hee saw a sword in Max's hand, which she hadn't noticed until that moment. Max gave her the sword as warned her about the creature's paws. Min-Hee stared at Max, dazed, and Max told her that she had to defeat the creature, but he would help her.

Max quickly explained that the creature was a hellhound. He then explained that he was a satyr, and that he was protecting her, a demi-god. They quickly went back to camp and Max explained everything to Seung-Hoon. Max told him that it was time for Min-Hee to go to Camp Half-Blood. Seung-Hoon was sad to send Min-Hee, his only daughter, away, but he knew that she had to go. Min-Hee promised him that she would visit him, and hugged him one last time. Max and Min-Hee said goodbye and left for Camp Half-Blood.

1.Children of Harmonia have the ability to force a false state of peace upon someone, making them blind to any attack for a very short time.

2.Children of Harmonia have the ability to amplify their physical strength for a short time; however, they suffer from a sort of withdrawal once the effects have subsided.

1.Children of Harmonia have the ability to charm a single weapon into being unable to be used for any sort of offense for a short time.

2.Children of Harmonia can make a pact with a single person at a time, making it so that each of them receives a lesser effect from every wound; however, any wound that one of them receives, the other receives as well, to the same lesser degree.

1. Children of Harmonia have an innately faster rate of healing than other people.

Children of Harmonia have the ability to slightly calm the minds of everyone near them, no matter what side they are on.

Children of Harmonia have the ability to charm a weapon so that it heals wounds, rather than causing them; this drains the child of Harmonia and the user of the weapon extremely.

3 Month After Character is Made

1. Children of Harmonia have the ability to greatly amplify the abilities and powers of a group of people near them; the user, however, is extremely drained from this action.

1. Children of Harmonia are able to charm all the weapons in the immediate area around them to not attack for a short time, but that includes their own.

1.Children of Harmonia are able to everyone in their immediate vicinity to become so harmonious they lose their will to fight, but that includes themselves.

1. Children of Harmonia tend to have well balanced and harmonious personalities.

2. Children of Harmonia are good at overseeing treaties between people 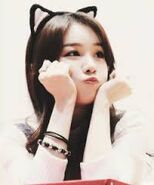 Add a photo to this gallery
Retrieved from "https://camphalfbloodroleplay.fandom.com/wiki/Archived:Min-Hee_Choi?oldid=1479187"
Community content is available under CC-BY-SA unless otherwise noted.