Nayeli Parra
Daughter of Thanatos
this character belongs to karma 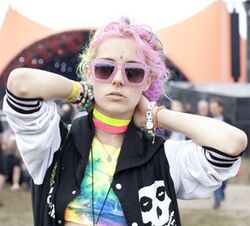 Soy Nayeli Yurixi Parra, I'm a Chilean-Italian demigoddess. I'm a child of Thanatos, one of many agnate siblings. I was born a few minutes after my identical twin sister Liliosa.

I'm a fireball of energy. I'll emote all over every person I meet. Whether it be love, fear, joy, aggression or melancholy I'm going to share the wealth with the first and the last person I come into contact with. I don't care that most people aren't willing to cry with me because I found a baby bird torn to pieces by a bigger animal. It doesn't matter to me that when I'm happiest I and I alone want to do cartwheels all day long and sing "Estoy en el cielo" at the top of my lungs.

I abhor all forms of violence even for play. I won't stand by and watch someone being verbally or physically abused. My penchant for pacifism doesn't mean I don't spend time training. My distaste for the clatter of blades fuels my desire to not be slaughtered defenselessly. I have the darkest of dark sides and even though that butterfly I found chewed up and missing a wing made me cry for two days straight I kept it. I also found a way to turn it into a hairpin. I'm sentimental in an abnormal way. I've been desensitized to death and don't fear it although I'm willing to take my grief to the extreme.

I've got an odd sense of spiritualism believing that my mother was blessed by the spirits, blurring the line further between life and death. Mi hermana and I grew fond of the bright colors, skull art and the celebration of Dia de los Muertos which I like my mother and sister closely associated with our mother's birthday. I know I'm not an artist of the same calibre as my sister or my mother. I've inherited the sweet voice that runs in the family. 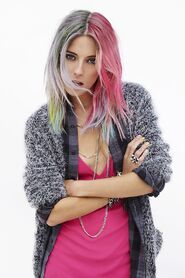 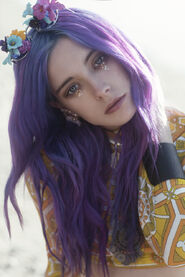 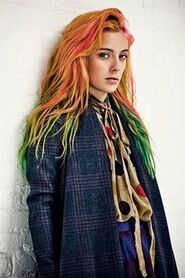 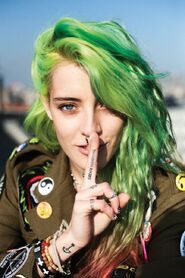 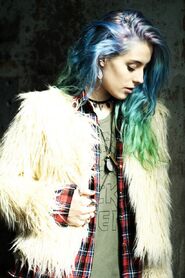 Adriana is a mortician and has been studying Mortuary science since she began her training in the municipal cemetery of Santiago as a young woman. She comes from a famous family of Chilean artists, musicians who express themselves through song. Adriana wasn't gifted with a sweet voice or a brilliant mind, what she did have was a sharp eye and a steady hand. She became an artist of a different medium. She was an excellent painter but her father never thought she would survive on her talent alone like the rest of the family did. He pushed to have her trained as a mortician and her creativity shined. She mastered techniques such as embalming, burial and cremation of the dead quickly. She has always been deeply connected to the dead. Having been born November 1st she embraced the holiday that coincided with her birth.

Much like the rest of her family her work became famous in Chile, in Santiago specifically. Her skill and passion, how painstakingly careful she was with other people's loved ones led to her receiving endless compliments for being able to make men, woman and children look at peace in their final slumber. She met Thanatos while she was participating in the urban legend of Sara Braun in the public cemetery of the city of Punta Arenas. She was involved in the make-up application and the hair-styling of the embalmed body. She worked closely with another person, a man. She and Thanatos made all sorts of inappropriate jokes as they worked side by side. They even began heavily flirting, by the time they were done and relieved from their duties they hooked up. She went back to her home and her work in the Santiago area thinking of him a few times afterward, a lot more when she found out she was pregnant with his twins.

Mi hermana, Liliosa, and I were born in Santiago, Chile to Adriana Parra and Thanatos. We were raised in our mother's home in the bedroom above the morgue. We shared that room our whole lives, our mother let us draw on the walls which were already painted our favorite; bright colors. Thanatos met with our mother not long after we were born, he explained everything to her about who he was and who their daughters were. He even left us gifts, weapons in the form of mundane objects. She thought he was drunk, high or just insane. She never told either of us that our father was a god, she just didn't believe it. She was afraid that he might be a lunatic. Thinking he would come back one day for whatever crazy person reason and that he'd spew more ramblings about powers and monsters. She kept a close eye on us and the people who interacted with us after that.

Éramos pequeños, we were small when we first began to use one of the abilities inherited from our father. With the ability to speak to the recently deceased we were often lured into the morgue where we spoke with the dead about the life they weren't entirely sure they'd finished living. In between secret trips to the morgue at night while our mother was asleep, a little secret we didn't know was fully aware of, Chile held all sorts of natural wonders such as prehistoric caves, glaciers and volcanoes. In our native country we enjoyed camping in Pumalín Park, skiing and snowboarding in the Valle Nevado resort and the occasional thrill ride at Fantasilandia. For the three of us there was no better place to explore among the sights than the place they frequented the most, the Jardín Botánico Chagual and the Parque Metropolitano de Santiago. The zoo is where I quickly became fascinated with zoo animals while simultaneously learning I was disgusted by certain forms of living enclosure; undersized cages that looked like prison cells.

The forest inside of the huge park in Santiago became a fun little safe haven. We were known to have wandered in there prior to the first of many monster attacks. A harpy followed us into one of the flat zones of the Jardín Botánico Chagual behind a small hill. At almost eleven years of age we were partial to roaming the botanical gardens without permission sneaking away from our mother while she was in the restroom. We hid from the harpy thinking she was someone from park security. If we were caught and our mother found out we might never be able to come back. When we found out what we were really running from the difference between mi hermana and I was survival of the fittest. I'm not as swift as Liliosa and I was spotted leading to us both being found by the monster pursuing us. Liliosa got it together quicker finally showing me what that 6th birthday present and all her archery classes could do.

Our home near the water didn't make getting away from the monsters any easier. We were constantly attacked by Telekhines from the water at the beach across from where we lived. Even avoiding the beach didn't solve our problems with monsters either. Hellhounds were perfectly capable of finding us above water and they were coming directly to the entrance of our house when they did. All the attacks on our home turf gave me the opportunity to learn the truth about my own birthday present. The rainbow spiral skateboard. I was using it to beat a Hellhound with and as a shield. When I pulled too hard on the trucks and it came apart turning into twin hooks, one for my left hand and one for my right.

In our teenage years approximately fifteen years after we were born during a special trip to Lauca National Park a satyr came to bring us to camp. He had been living in the forest in the National Park and when smelling two demigoddess found us almost instantly. He started talking to us and our mother. About the world of myths and legends that hide in plain sight. Our mother wasn't willing to let us to go so we didn't. She still didn't believe the world of gods was actually real. Thanatos taking someone's soul to the Underworld was the demonstration used to prove everything, ultimately leaving was the only way that mi hermana, Liliosa, and I would be safe after we'd been discovered, all because Thanatos allowed our mother to see him taking a soul. That was before the trip to Canada for our 16th birthday came around.

We had a good mother, she tried. She ended up wasting money buying good clothing for us, hotel rooms and flights for the three of us to the point where she didn't have enough to buy us snowboard and skiing gear leaving her with no option but to give us the gifts Thanatos left us before taking us to Canada for our first experience out of Chile. We were in the Yukon territory when our last attack happened. Liliosa found out what her snowboard could do, and with the my help finding out what her necklace could do, we took down a hellhound in close combat and killed it. Our mother was finally ready to let us go when all the noise we'd made fighting the monster attracted the attention of a Gem nymph. The Gem nymph tried to explain to our mother what just happened, she stopped the nymph right away and told her that she should take us to Camp. Our mother booked flights for us and the nymph to New York which we had no problems getting to.

3 Months After Character is Made (Locked)

6 Months After Character is Made (Locked)

9 Months After Character is Made (Locked)

Retrieved from "https://camphalfbloodroleplay.fandom.com/wiki/Archived:Nayeli_Parra?oldid=1791627"
Community content is available under CC-BY-SA unless otherwise noted.