Ghostly Guardian of the Library

Raimonda was born to a young merchant couple in Venice, Italy over 400 years ago. She was a regular mortal girl for most of her life until she turned seventeen and caught the attention of Zeus. Zeus began woeing Raimonda, sending her magnificent gifts, and being only as charming as a determined god could be. So Raimonda did what any girl during that time in her position would do. She caved, and had a 'relationship' with Zeus, but this was no love story for Raimonda. As soon as he got what he wanted Zeus left Raimonda, but that did not stop a goddesses wrath. Hera was still pissed that Raimonda had stolen Zeus's attention, so she cursed her into never being able to find a permanent home again.

From that day on Raimonda travelled around Venice, trying to find a new home but every one she tried the chased her away like she was diseased. She became desperate, she even tried living in an alley but a pack a feral dogs chased her out. By this time Raimonda was ready to kill herself, but before she had the opportunity, Don DiGiovan, a powerful man offered to help her. He promised that he would be able to get rid of her curse. So Raimonda made a deal with the devil, she went with Don, and he took her to a secret room behind a painting. When the door closed Don attacked Raimonda attempting to rape her. But Raimonda fought back as hard as she could, unfortunately that was not enough, Don ended up stabbing Raimonda for rejecting him. As she died Raimonda saw a woman appear out of thin air, and when that woman appeared Raimonda felt different like a weight had been lifted. She opened her eyes enough to see Don surround by a flash of light and flying out of the painting. The woman turned and looked into Raimonda's eyes and told her that the library would now be her home, as long as she helped to protect it from those who would use its knowledge for evil. Raimonda agreed and then fell asleep, when she woke up she found herself floating near the ceiling of the library, she was confused by what had happened, when she reached out to touch a chair, her hand passed through it. Distraught Raimonda realized that she was a ghost, she spent the next few decades floating around the library watching an elderly woman come and go while reading the books. Then one day the woman stopped coming, and Raimonda felt a chill, then a dark haired man entered the library, Raimonda knew this man would not use the library for good, she grew extremely protective of her home, and screamed at the man to get out, then like with Don the man got surrounded by light and got sent out of the library. Raimonda knew this was her destiny now, so she began to practice with her powers.

Using her powers Raimonda was able to read the books that were in the library, and gained a knowledge of the magic within better than any of the demigods that entered. But as the centuries went on Raimonda grew lonely not connecting well with the men and women that entered the painting as the centuries passed. Then one day the painting came into possession of a young demigod son of Hecate, Remi. She began speaking to him, but refused to show herself to Remi, so he took matters into his own hands and cast a revealing spell, which caused her to become visible, then the two began talking and became good friends. Using her knowledge and Remi's powers they were able to create an enchantment that would allow her to leave the painting, while retaining the connection to protect the painting.

When Raimonda screams humans in the basic vicinity freeze at the sound, or run in fright

Raimonda can possess humans for a short period, but she cannot use this power to harm the possessee

Raimonda is intangible so weapons and physical attacks will pass right through her, however magical attacks still work on her

Raimonda can turn invisible when she choses, however children of death gods are still capable of seeing her when she chooses not to be seen

Raimonda is able to move things without touching them

Raimonda can wisp, a sort of teleportation in which she disappears then appears in wisps of light

Raimonda is able to sense if someone is evil or good.

Raimonda can move through solid objects

Since she is dead nothing Raimonda does requires energy 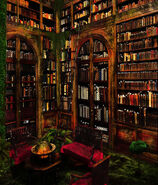 My Wisping power
Add a photo to this gallery
Retrieved from "https://camphalfbloodroleplay.fandom.com/wiki/Archived:Raimonda?oldid=1160244"
Community content is available under CC-BY-SA unless otherwise noted.