Child of the Rainbow

She's sweet, kind, funny, and one heck of a gal! There basically no hate in her whatsoever.

When Donald was in a Wind Chime Shop, he ran into Iris and they both dropped the wind chimes. They looked at each other. Donald saw Iris'. He said they were like the most brightest stars in the black night sky. She left her wind chime on floor by accident. Donald asked when he'll see her. Iris said she'll see him in a couple months.

A couple months went by and Donald bumped into her. He took her to his Luxury Apartment. Iris was amazed. He ran a gaming company. She finally told the truth about herself. She was a goddess. Donald was shocked. But, he didn't care. As long as Iris was there with him.

8 months later, Iris was going to have a baby girl. Donald was filled with glee. He got his guest bedroom made into a baby girl room.

9 months later, Iris gave birth to Raina. She was healthy and strong. The doctors said that she was diagnosed with ADHD and dyslexia. The doctors said it was a bad thing. Donald didn't Donald took Raina home. As for Iris, she had to go back to Olympus. They said there goodbyes and she went back. Raina was an easy baby. She didn't cry much. She always giggled as smiled.

13 years later, Raina was 13 and only saw her mother a few times on the sidewalk. By the time a car zoomed by, she'll gone. Raina asked who was the strange lady was across the street. He said it was her mother, watching her for her safety. Raina smiled.

4 years later, it was going to be Raina's birthday. She wanted to see her mother officially. That was the only birthday present she wanted. Donald panicked. Just then, a shimmering white light appeared in front of Raina's eyes. She was blinded by the light for a minute or two. Iris said to Raina that she was a goddess. Raina was astonished. Iris said she'll send a satyr for her protection. After Iris left, Raina chanted happily: "I MET MY MOTHER! OFFICIALLY! I MET MY MOTHER! OFFICIALLY!"

Raina woke up at six A.M just to get to the bus stop on time. When she walked outside, she met a girl, sleeping by steps. She couldn't go around her nor, step over her since the steps were kinda steep. Plus, she recognized the girl from school. They were in the same science class. Raina shook her awake. The girl woke up with dark circles under her eyes. When she met eyes with Raina, she said hi and got up. Raina recognized her from science class. She forgot her name and asked. She said her name was Megan. Raina said hi. Megan gave her a Peace-Heart Necklace. Raina put it on. Megan said to press the middle. She pressed the middle and transformed into a Celestial Bronze Sword. It was well-balanced in Rain a's hands. Megan said she'll give Raina lessons after school. At school, Raina saw her best friend, Cece. They told each other there secrets. How Raina was afraid of the dark and how Cece hated fish. Cece asked how Raina got the necklace. Raina lied and said it was a gift from her dad. Cece never knew if Raina was lying or not. After school, Megan gave Raina some lessons how to fight and some tips. She slashed, dashed, and stabbed the dummy until it was dust. Megan took Raina to Camp ASAP to avoid and monsters. Cece popped up in front of them and asked where they were going. Megan somewhere important. Cece asked if she could tag along. Megan said no. Cece asked the same question, a little stern though. The same answer. Cece turned into a venti. Megan hid and Raina pressed the middle of her necklace, turning it into her sword. She attacked Cece with her best shots. Cece fled, knowing she'll be back. Raina and Megan ran as fast as they can to Camp. An hour later, they crossed the boarder, exhausted.

When Raina was walking in the forest, she got lost and went into the deeper part of the forest. Raina heard a noise and turned around. A hellhound bigger than her growled and snarled. She ran and the hellhound charged after her. The hellhound tackled her. Raina put on her brave face, got out her sword, and tried to attack it. The hellhound dodged and slashed her wrist, knocking the sword out of her hand. She backed up into a tree, knowing there was no where to run. The hellhound slashed at her chest and disappeared. Raina laid on the ground, almost lifeless. Then, a bright light surrounded her. It was Iris and Iris turned her into one of her nymphs. Iris was gone and Raine regained her strength. She ran like hell out if the forest. 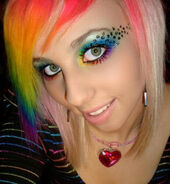 Me!
Add a photo to this gallery

Mah teddy bear, Mr. Cuddles. He sits on my bed during the day and sleeps next to me every night.
Add a photo to this gallery

Pastel is Raina's pet pegasus. She lives at the stables. Pastel was also a gift from her mother, Iris. Pastel's mane, bottom feathers from her wings, and tail are altered with rainbows

Retrieved from "https://camphalfbloodroleplay.fandom.com/wiki/Archived:Raina_Starline?oldid=1384979"
Community content is available under CC-BY-SA unless otherwise noted.