Artemis is my creator, but apart from that, I feel as if all Lemurs are my family...

Saffy is cheeky, silly and quite the actress. She enjoys being playful and acting childish, but can also become quite confused, scared and stressed when she thinks about all the endangered Lemurs. She loves hiding from others, and can go days on days of hiding to get away from someone. She can be flirty if she want's to but she can seem much like an air-head at times, not thinking before doing something. She can also be quite the idiot sometimes, and can also be a compulsive liar.

Thought Saffy was gone for an awful while trying desperately to save different Lemur species from becoming extinct. 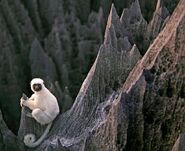 Beach Wear and Formal Wear 1
Add a photo to this gallery
Retrieved from "https://camphalfbloodroleplay.fandom.com/wiki/Archived:Saffy?oldid=1547242"
Community content is available under CC-BY-SA unless otherwise noted.