“One must be cold if one wishes to savor chaos.”

Salina Tresler is a demigoddess. She is a child Eris, she and a small group of friends survived the trip to camp after being picked apart by Stymphalian Birds together and watching as one of their own perished a short distance from Half-Blood Hill.

“It's a cruel and random world, but the chaos is all so beautiful.”

Travis Tresler met Tanya (Eris) on his 21st birthday, he had been looking for love in all the wrong places for years. The minute she walked through the door he was sure his heart stopped. A bar fight broke out not long after, but he did not take his eyes off her for long. One thing led to another, within days they were seeing one another on a fairly regular basis. He thought they were exclusive, when he found out he fathered her daughter, and that he would never see her again he rejected all of it. He did not believe Salina was his, and definitely did not believe Tanya was going to leave. He was wrong, a blood test proved he was Salina's father. She grew up not knowing much about her mother, her father cut any possibility of communication by refusing to talk about her. Whenever Salina asked her father about her mother he consistently reminded his daughter that her mother left them, she abandoned the of both them. Salina was never satisfied with this answer, and she often went looking for the truth on her own. It was more difficult than she imagined, it was almost as if the woman never truly existed. Not knowing her name was the hard part. She was determined not to let anything stop her, she was in luck when she came across Riikka and her brother Niilo that fateful day.

Her growing group of friends were not helpful in finding her mother, they did distract her when she met with too much difficulty. She usually got angry with them when she realized how much time she wasted having fun with them. They always, and without fail, laughed off the idea of wasting time having fun. It was what she loved about them. Nevertheless the slew of monsters, and hordes of creatures that stood between her, and the answer she had always been looking for only slowed her down, they did not stop her. It was the girl she met at the orphanage the proved the most useful in terms of her search. Her father abandoned her, and her mother in same way Salina's mother had. Fighting with a mallet, then a machete she was not alone the first time she was faced with a monster attack, she was only eleven at the time. It was Telekhines, the experience almost made her hate water for the rest of her life. Being able to defeat the clumsy, slow-moving creature with the help of her friend Aisling, the moral support from her friends helped her to quickly overcome such a fear. She upgraded to a bladed weapon after the ordeal. Her encounter with the Scythian Dracanae who killed her father three years later was proof that her machete was a far better choice at that time.

Getting used to being an orphan took some time for her, she was a teenager with anger issues, no one wanted that around the house. Not even to foster apparently. She disliked most people, and she constantly talked back. Communication is a wonderful thing for a child such as Salina who was witness to such a traumatic event, and one involving someone close to her. The way in which Salina went about communicating with others was not at all appreciated. Although she did get a few unintentional laughs to her scathing remarks, and sarcastic question answers to questions, they more often then not stifled. Her friends made the effort when she could not bring herself to, they came to her, and snuck her out of the orphanage. It was like old times for her, even when Hellhounds, or Chimera made an appearance. For a short time she felt like her life was back to normal, that is until she had to return to the orphanage. Things were different one particular day from the start. She is the friend in her group to have met Dexter first. Despite knowing she is in love with her best friend's brother, she mistook Dexter's interest in her for something that it was not. Salina traveled to Camp with her small group of friends together fighting monsters along the way.

It was a devastating trip, at the end she lost the best of her friends. She watched Riikka die, and it corrupted her world view more than the bitter resentment her father filled her with. Pushing and shoving one another out of the way as they fought the Stymphalian birds she never noticed what it was Riikka was doing, no one did until it was too late. Everyone had gotten cut at least at leas a few times in the first couple seconds of the attack. It was pure mayhem, only Dexter knew to make noise, no one figured that out until Riikka had created the mosh pit. It may have turned them into human pin balls, it also allowed them to dodge or block an incoming beak. Unfortunately by the time the last bird was slain Riikka was lying on the ground among them. Getting Niilo to Camp without her is not something talked about. It usually ends in argument, an explosive repeat of the same fight they had on the night she died. Niilo calling everyone of them cowards for not having the decency to go back, and get her body. He hated them all, and he told so. Salina hated herself, his reaction made her feel like she betrayed Riikka, and him. If Riikka had not been turned into a nymph she believes their group would have self destructed. In that moment Riikka became the glue that held them all together.

The travel felt like it was a nice little distraction from reality, for while. There were moments were she stopped thinking about her father. She started to smile for a bit then feel bad for doing it, guilt is not a good look. It made her feel sick and almost hate herself. She was not about to go that far the rest of them still had the opportunity to die, they were not safe yet, it took her too long to realize that even if she were to be claimed she still would not be 'safe'. She might be more prepared to defend herself that started to look like a might fine reward in addition to survival. The knife he stole from her was no coincidence, she let him do it. It was not her good one so she was not going to miss it anyways. She might have wanted to see him again not that she ever thought that she would. She honestly thought he was going to die choosing to stay on his own. She decided not to care, she had group to watch her back. She may or may not have tried to convince her friends that they needed him whether they did or not. It was not because she liked him. She felt she was the best fighter in her group and she was convinced a bigger group meant a better chance of her being faster than someone else. That was infinitely more important than keeping a stranger around knowing he was gorgeous and a thief.

“The only order in the universe is just a cycle of calm and chaos.”

She does a lot of back talking. If someone asks her a question, no matter what it is, she is probably going to respond with a question of her own. She is rather irritating. She does not do it on purpose, or know that she is doing it. She is temperamental, and has a habit of starting fights. While she does love it, she does not do it because it is fun. Sometimes she does not agree, and she wants people to hear her point however useless it is to them. Regardless of how obnoxious she has to be she is always willing to goad someone, whether it is to get their full attention or because they aggravated her first. She is fair that way.

“Stop blaming outside circumstances for your inside chaos.” 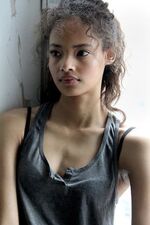 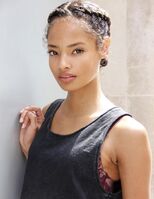 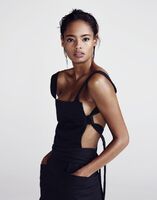 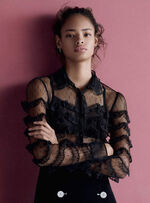 “Our real discoveries come from chaos, from going to the place that looks wrong and stupid and foolish.”

“In our quest for the answers of life we tend to make order out of chaos, and chaos out of order.”

•Children of Eris have the ability to focus an intense beam of chaotic energy which will burn any organic matter it touches. Any inorganic matter it touches begins to slightly break, warp and disintegrate.
•Since Eris could be considered a war goddess, her children can decrease an opponent’s strength and combat abilities for a short time, leaving them vulnerable to attack.

•Children of Eris are innately stronger in times of battle or any other kind of chaos.
•Children of Eris emit an aura of chaos and discord, making people around them more likely to misbehave and start fights. They can shut it off for a long time if they wish.

•Children of Eris have the ability to force a state of confusion upon another person for a limited time, allowing the child of Eris to attack or flee freely.
•Children of Eris can create a short lived “storm of strife” which causes everything within it to change, warp, or break. The effects are random, but typically powerful and can stretch over a wide area depending upon the amount of energy put into it, the larger the field, the more energy it drains.
•Children of Eris have the ability to cause a group of people or animals to become irrational and fight amongst themselves for no reason for a short time. Which can give the user a chance to attack or flee.
•Since their mother was depicted as a winged goddess, children of Eris can sprout wings for a short time, this enables them to fly; the longer they maintain this state, the more energy it drains. They must rest between flights and cannot make long distance traveling without resting often. However the wings are vulnerable to injuries and magic; they can also be customized to the user’s preference.

This character belongs to Hecate Grimm

Retrieved from "https://camphalfbloodroleplay.fandom.com/wiki/Archived:Salina_Tresler?oldid=1745487"
Community content is available under CC-BY-SA unless otherwise noted.