Santiago is very kind and caring. He can sometimes get cocky and also very flirty at times (but not as much as Luna). Santiago dearly loves his cousin Luna, but these feelings are never shown due to the fact that they are indeed cousins and Santiago is scared that if he tells Luna how he feels about her, she'll freak out and it might ruin their relationship as cousins.

Santiago's father, Ramon, was very handsome. He was mischievous yet charming. Cold yet sweet. And that brought the attention of Nyx. He was at work when an intern (Nyx) joined. He was her supervisor , but he did way more than that. They had a private relationship, he often brought her to his home where the drank wine and just talked. One thing led to another one night and Nyx was pregnant. She quit her the job and left, nowhere to be seen. Santiago's father wasn't happy at all. The next few months after Nyx left, he heard a knock at his door and at the footstep was a white basket, with a sleeping boy, with a letter saying: He's yours. -Nyx.

Later on almost forgetting Nyx, Ramon found another woman. She was quite the charmer and almost as devious and mischievous as he was. She was a demigod, but she didn't confess until she encountered a monster whilst on a date. After slaughtering the cyclops she explained everything to Ramon. He then confessed having a two-year old son. They got to his home and he showed her the letter that Nyx had given him. She sighed and told him that Santiago was a demigod as well.

It was a very normal day for Antonio Diaz. He was at a bar getting drunk as usual. But he saw a very beautiful woman all by herself. He decided to make her feel 'comfortable' and started chatting with her. They drank lots as well as talked a lot which then led to making out. The lady got very interested in Antonio and easily seduced him to sleep with her even though Antonio was going to do that to her. Right after the lady did that, they immediately slept together. The next day, the lady was gone and Antonio Diaz acted as if that fling he had never happened.

A few months later, when Antonio was at his apartment, his doorbell rang and he saw that there was a basket on his front door. There was a baby in the basket and a letter for Antonio. Antonio brought the basket inside and read the letter. He was very shocked that he slept with a goddess and didn't even want to do anything with the baby. Antonio brought the baby to his brother Ramon Diaz. Ramon already had a family: his wife, and their son Santiago (age 3 when Antonio talked Ramon about the situation). Ramon himself was a demigod, a child of Notus to be exact. Santiago was a demigod was well, a child of Nyx. His wife was also a child of Deimos (married two years after Santiago was born). Antonio told his brother Ramon everything from the goddess to his baby daughter. Being a demigod himself, Ramon wasn't surprised at all. Antonio was shocked that he wasn't surprised and Ramon confessed to his brother that he is a demigod himself. Antonio asked that if he can raise the baby for him and Ramon agreed, knowing his wife would be thrilled in raising a girl.

In their childhood lives, Santiago and Luna were best friends. Luna knows that she wasn't born into the Diaz family and that Antonio Diaz was her true father. In school, they were each other's only friends and Luna grew a crush on her own cousin. (Santiago liked her as well.) But even though Santiago and Luna consider themselves each other's only friends, Luna was quite popular and ever guy in their school liked her.

When Santiago turned 13, Luna was 12, but both demigods had a scent so strong when they were together and that was Luna's first monster attack. Santiago and Luna were walking home one day. A giant scorpion attacked them. Santiago and Luna were both terrified and they stood there in horror. Luna screamed as the scorpion charged at them. However, Santiago heard a voice him his head (Nyx) telling him to morph his bracelet into a celestial bronze sword. Santiago did as the voice told him and he protected Luna from the scorpion. Luna got out of the scene with no bruises or scratches, but Santiago came home with a bunch of them which made their parents worry a bit. They thought it was best to tell them now then later but Ramon's wife said that they (Ramon and wife) should wait to tell them next year when they were both old enough.

When Santiago was 14 (Luna was at home), he was coming home back from baseball practice and a Scythian Dracanae attacked him. Santiago morphed his bracelet into his sword and battled it. After a couple of minutes, he disintegrated it. Santiago ran back home in fear and told everything to his parents and even about the monster attack that happened last year when Luna was with him. His parents then new it was time to tell him and Luna the truth about their origins. When Ramon and his wife told Luna and Santiago that they really were demigods, they were shocked. They both couldn't believe that they where half-gods. Ramon told Santiago that he wasn't really Maria's (Ramon's wife) child, but that he was Nyx's child. And Ramon told Luna that Aphrodite was her mother. Both were still in shock as Ramon calmly told them this. Maria said that they should learn the basics of protecting themselves from a future monster attack and that they should stick to each other at all times when traveling outside. Santiago and Luna only nodded yes. From that moment on, Santiago and Luna trained at least 2 hours every day.

Jumping back to Luna, she had her next attack two weeks after Santiago had his. (Age 13) A harpy attacked her while walking to a park. Aphrodite's voice came into her head and told her to morph her earrings (received at age 12) into a crossbow. Luna did as told and she morphed her earrings into a crossbow (arrows were celestial bronze). Luna disintegrated the harpy in 10 shots thanks to the training she was getting from her aunt and uncle (Maria and Ramon).

Their next monster attack, Santiago and Luna were coming back from a party. (Santiago: age 15, Luna: age 14) Two hellhounds attacked them. Both got each other's backs and they defended themselves very easily since Ramon and Maria were pushing them a lot in their training sessions. (Santiago; age 16, Luna; age 15) Another monster attack occurred the next year. They were at a wharf and a Telekhines attacked Luna. Santiago quickly disintegrated it before anything could happen to her.

When Santiago turned 17 and Luna 16, Ramon and Maria then told them about Camp Half-Blood. When the two heard about this, they got excited and wanted to go right away. Ramon and Maria flew down to Long Island to drop them off close by the camp. Luna and Santiago waved goodbye to them and they made their way to the camp's borders. However, a Stymphalian Bird came up at them and attacked Luna (she was in front of Santiago). Luna screamed as she got attacked by it. Outraged, Santiago morphed his bracelet into his sword and charged at the Stymphalian Bird. It was a hard battle but somehow, Santiago got to disintegrate the Stymphalian Bird by himself. Santiago rushed towards Luna and she was about to die. Santiago pleaded with the gods to do something that will save Luna. Aphrodite saw this on Olympus and 'tsked' as she saw their love already dying. Because it was her daughter dying and her lover (well, soon to be lover) pleading for help to save her, Aphrodite was very touched at the scene and decided to transform her into a peace nymph. As she died, Santiago cried. But all of a sudden, Luna gasped and was brought back to life by Aphrodite. Santiago hugged Luna as she sat there in confusion since she did die, but was brought back to life. They both ignored that fact and went into camp where Santiago got claimed as a son of Nyx. However, Luna did not get claimed as a daughter of Aphrodite and so she asked around what may have happened to her. Then one night in a dream, Aphrodite came to her (as herself) and told her that she was now a peace nymph forever (until she dies or is killed). 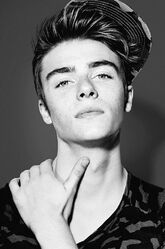 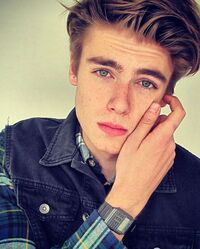 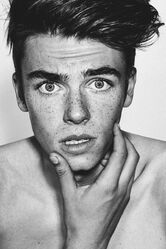 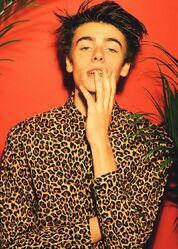 Add a photo to this gallery
Retrieved from "https://camphalfbloodroleplay.fandom.com/wiki/Archived:Santiago_Diaz?oldid=1567583"
Community content is available under CC-BY-SA unless otherwise noted.