This character belongs to Elemental99

Sophia changes her hair color every other week

Camp Half-Blood, but she is from New York City, New York

Sophia might come across as serious and cold when you first meet her but that's just because she doesn't trust strangers easily because of a past incident. But once you become friends with her you see that she has a great sense of humor. She does have a very bad temper though. She has quick wits and is great for analyzing situations. She is also very competitive. She is very protective of her family and friends.

Julie Watson was walking through the Metropolitan Museum of Art as she was very interested in Greek Mythology. Out of all of them Zeus was her favorite, every time she visited the museum she would stop at the statue of him. This time though she noticed a man, a very handsome one at that, looking at the statue. She walked up to him and introduced herself. Everyday they would meet at the library. After 2 months Julie realized she was pregnant. When she told Zeus he told her who he really was and to take care of her. He also gave her a celestial bronze sword to help protect the baby. And on August 17, 1999 Sophia Watson was born.

Sophia was a good girl growing up. But whenever she did make mistakes she made sure to cover her tracks and make sure it looked like someone else did it. She was a great leader in group projects and loved bossing people around.

A few weeks after she had turned nine she was riding her bicycle when she was attacked by fire-breathing horses (Sophia studied Greek Mythology and loved it thanks to her mother). She didn't know what was going on at the time, nor did she know how to fight so she ran away from them screaming. When she got home her mother heard her and came out sword in hand. She sliced through the fire-breathing horses (Zeus and given her a few pointers and also told her about Camp Half-Blood), she knew what they were because she was clear-sighted. She told Sophia about her father and that she must go to Camp Half-Blood but Sophia refused because she didn't want to leave her mother alone. Sophia knew that she might danger her mother so she began to learn how to fight (Her mother helped her a bit at the beginning). So year after year Sophia was attacked by monsters until one year. It was the day after her fifteenth birthday and she was walking in the park when a humongous black dog with claws appeared. She had no idea what to do and she was quite good in controlling her powers by now. She tried hitting it with wind and her sword but to no avail. She finally struck it with her sword and it disintegrated. She ran home and told her mother about it. Her mom told it was time to go to Camp Half-Blood and too bad if she didn't want to go. So Julie drove her to the camp and after a teary goodbye Sophia left for her new life. She met the camp director Alexander the Great and was claimed after a few days. 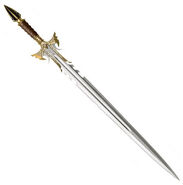 Photo of Sophia and her bff Kara

Amber, Sophia's Siberian Husky
Add a photo to this gallery
Retrieved from "https://camphalfbloodroleplay.fandom.com/wiki/Archived:Sophia_Watson?oldid=1677146"
Community content is available under CC-BY-SA unless otherwise noted.