Youngest of the Wolf Twins

Todd is usually quiet and serious, mostly stern. He judges people all the time, and if he doesn't like them, he's hostile and unforgiving. He listens to everything his sister says. Wherever she goes, he goes, as he's always depending on her as if she's his alpha.Sometimes, he disagrees with her, but he never shows it. Whenever he talks to her, it sounds more like an argument, but really, it's just them having a brother-sister conversation. When he gets fired up, she is the ONLY one who can call him off. And until she does, he ain't stopping. Unless he gets bored.

Christian Theron worked at a wolf-wild life reserve in Colorado, located about 20 or so miles outside of the small city of Tinmath. He was a demigod child of Ares, filled with an insatiable hunger for thrill and living on the edge. Working with the wolves provided that lifestyle, while keeping him out of the fights he seemed drawn into while in big cities. He minded his own business and expected others to keep out of his.Lyssa became interested in Christian after watching him work with the wolves for a while. She had a natural fondness for those who worked with canines, and Christian's mercurial personality added to the attraction. One night, when Christian was in town at one of the local bars, he was approached by an attractive woman, with a seeming animal magnetism. They hit it offwell. Nine months later, when said woman, appearing much more goddess-like now, appeared on his doorstep with twins: he knew he had fallen for the old folly of sleeping with a goddess. Still, they were his kids. He took them in and named them both: the eldest, his daughter, as named Evey; and the younger, his son, named Todd. He bought a house off the reservation and inside the town lines for his new family to live in. Every morning he’d drop the kids off at the bus stop, and then drive an hour or so to the ranch and get to work. Their father was always out and about so the children mostly grew up on their own, causing a ruckus all over the small town they were forced to be raised in and loving the days they could spend on the reservation with their father, working with the wolves. As Evey got older, her ‘Lyssa’ side became more and more pronounced. She had a general hatred for authority, adults, rules, and anything else that tried to keep her from doing what she wanted. quickly she gained a reputation as a ‘bad girl’ and was subjected to the common small-town gossip and slander. Todd was her opposite, keeping quiet, while internally harboring the same motions as Evey, constantly judging the small town he grew up in and hating the common small town folk that inhabited it. To Todd and Evey, this town was just too small to hold them. The twins grew up with an interesting dynamic: their father was never around and it was up to them to basically raise themselves. Evey stepped up and became the leader of the two, taking care of them and keeping them sane within theirsmall town. They two of them were inseparable through all of school, pitching fits and causing fights if they weren’t together. They both were prone to sudden rages and seemed to be in a constant fight with each other. In reality that’s just how they had their conversations. Whenever Todd was in one of his rages, only she could calm him down. One night the twins and a group of people snuck out of town and drove over to Fort Collins to hit the small club scene that existed. They spent the night there partying and drinking, mostly wreaking havoc and having fun until Evey and Todd got kicked out for trying to light a bar stool on fire. As they stumbled out of the club laughing, they didn’t notice the shadow following them home. And it tracked them all the way back to the small house they lived in. The two of them managed to get into their home, only to have the door kicked down a second later by a massive hellhound. The twins were completely wrecked in horror, Todd tried to fight it off with a knife he grabbed off the kitchen counter, but it seemed to do nothing to the beast. Just as the twins were cornered, the hound collapsed on the ground, dead. Behind it stood their father, holding a bronze sword. The one man who ever struck a note of fear within the wolf twins heart would be their father. He yelled at them for being so irresponsible, for allowing themselves to get in this situation. If they had only exercised control over their impulses they would have never been in this mess. So he gave them the best punishment he could think of, they would be shipped off to camp halfblood in the morning on the first flight. If they couldn’t keep a low profile, they would just have to live there where he knew they would be safe.Christian made good on his promise, the next day he took them on the first flight to New York, and personally drove them to Camp Half-Blood. 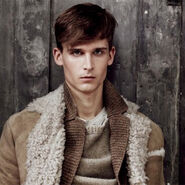 Retrieved from "https://camphalfbloodroleplay.fandom.com/wiki/Archived:Todd_Theron?oldid=1315262"
Community content is available under CC-BY-SA unless otherwise noted.