Guardian of the Lynx

Is really mischievous and has no regard for a person's death. He is quite apathetic. His inspiration is the Cheshire Cat from Alice in Wonderland.

Whenever they are not needed in Olympus or the location they were assigned too, you will find them at Camp....

He is currently one of t the four guardian of the Lynxes.

He was kidnapped by a group of rogue satyrs in Siberia one day, he was a lynx at the time. These satyrs despised the gods and Lord Dionysus more than the rest of them. As a thought of revenge; they found Vaska in his lynx form and started beating him ruthlessly. Injured in the process, he changed back into humanoid form and was severely beatened. Tied to a rock with golden chains. The satyrs took turns raping and beating him to the point of exhaustion; the most insidious part was when the leader of the group slashed his eye out after Vaska openly hissed at him in protest. When they all passed out of their hangovers, Vaska, secretly broke the chains and ran to where he can no longer see them... he then passed out of exhaustion. Demeter took pity and went for Boreas to send him to Camp half Blood. He awoken the next day on a branch and was found by friend and lover...Aloric Bane. 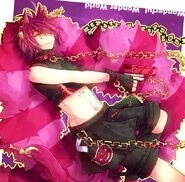 Add a photo to this gallery
Retrieved from "https://camphalfbloodroleplay.fandom.com/wiki/Archived:Vaska?oldid=1547266"
Community content is available under CC-BY-SA unless otherwise noted.