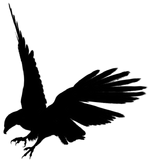 Being a nymph of the king of Olympians, he possesses much confidence in himself. He loves playing around and doesn't really believe in taking things so seriously. Sometimes you just have to chill and make things work. No need to worry so much. It's almost as if he's the happy-go-lucky type however, he makes sure that he does his duty well while, of course, still having fun.

After 2 years residing at Mount Olympus serving his creator, Vaughn was finally given the task to go down to earth and focus more on protecting the eagles located there since they were getting closer and closer to extinction. The animals residing at Mount Olympus are safe anyway. Actually, when Zeus told his golden eagle nymphs to go down and walk the earth, Vaughn refused for he believed that if they were all to go out, then who would guard the eagles on Olympus? Zeus understood his point and so he let Vaughn stay for a few years. On October 2014, he finally went to CHB.

Retrieved from "https://camphalfbloodroleplay.fandom.com/wiki/Archived:Vaughn?oldid=1640585"
Community content is available under CC-BY-SA unless otherwise noted.